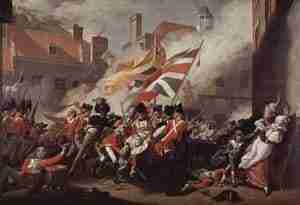 The Battle of Jersey (6 January 1781) was an attempt by French forces to invade Jersey and remove the threat the island posed to French and American shipping in the American War of Independence. Jersey was used as a base for privateering by the British, and France, engaged in the war as an ally of the United States, sent an expedition to gain control of the island. The expedition ultimately failed, and its commander, Baron Phillipe de Rullecourt, died of wounds sustained in the fighting. The battle is often remembered for the death of the British officer Major Peirson, and a painting based on his final moments by John Singleton Copley.

Only {convert|14|mi|km} off the coast of France, and placed on the principal sea-borne supply route to the French naval base at Brest, Jersey was a location of strategic importance during any war between Britain and France. Large numbers of privateers operated out of the island, causing chaos amongst French merchant shipping. Jersey privateers were even operating off the coast of America. The French government was determined to neutralize this threat. Furthermore, at the time, Gibraltar was in the midst of the Great Siege: contemporary British newspapers reported that the attack on Jersey was an attempt to distract British attention from Gibraltar and divert military resources away from the siege.

Aware of the military importance of Jersey, the British government had ordered that the island be heavily fortified. Gun batteries, forts and redoubts had been constructed around the coast, and round towers were in the process of being erected as well. The Royal Militia of the Island of Jersey, comprised some 3000 men in five regiments, including artillery and dragoons. Regular army units—the entire 95th Regiment of Foot, five companies each of the 83rd Regiment of Foot (Royal Glasgow Volunteers) and 78th Highlanders, and around 700 “Invalids” (semi-retired reservists)—were also present. The total force amounted to about 9,250 troops of all types. A naval force, the “Jersey Squadron”, was also based in the island, but was on a cruise against the Dutch at the time of the invasion.

On 1 May 1779, a Franco-Dutch force attempted a landing at St Ouen’s Bay. Early that morning lookouts sighted five large vessels and a great number of boats some three leagues off the coast, proceeding towards the coast to effect a landing. Guns on the cutters and small craft supporting the landing fired grapeshot at the defenders on the coast. The defenders, the 78th Regiment Highlanders and Jersey militia, together with some field artillery that they dragged through the sand of the beaches, had by fast marching arrived in time to oppose the landing. The defenders were able to prevent the landing, suffering only a few men wounded when a cannon burst. The French vessels withdrew, first holding off a league from the coast before leaving the area entirely.

Despite the misgivings of the French military, who believed that an attack on Jersey would be a futile waste of resources, with any success being short-lived, the government approved a plan put forward by Baron Philippe de Rullecourt. De Rullecourt was an adventurer and a colonel in the French Army. King Louis XVI had promised de Rullecourt the rank of General and the Cordon rouge as soon as he had control of the town of Saint Helier, the island’s capital. The Second Commander was an Indian prince, named Prince Emire, who had been taken by England in wars in India, had been sent to France with other French prisoners and whom the French had since retained in their service; a member of the British force wrote of him: “He looked quite barbarian, as much as his discourse; if our fate has depended on him, it would not have been of the most pleasant; he advised the French General to ransack everything and to put the town to fire and to blood.”

Officially the expedition was a private affair; however, funding, equipment, transport and troops were provided by the government. In order to conceal their involvement, the government went so far as to order the ‘desertion’ of several hundred regular troops to De Rullecourt’s forces.

On 5 January 1781 the expedition, consisting of some 2,000 soldiers in four divisions, set out. Jersey still celebrated 6 January as ‘Old Christmas Night’, and the French landed undetected. The 800 men of the first division landed at La Rocque, Grouville, and passed close by the guards without being noticed; a French officer even said that he had slept beneath the guards, but that the guards had not heard the French. The guards were subsequently put on trial, where it was found they had abandoned their post to go drinking. The French first division stayed there most of the night. The 400 men of the French second division landed amongst rocks and was entirely lost. (The initial British report was that a privateer and four transport vessels had been lost, together with “upwards of 200 men”.) The boats that contained the third division, consisting of 600 men, were separated from the rest of the fleet and were unable to join it. The fourth division, consisting of 200 men, landed early in the next morning at La Rocque. The total of the French troops landed on the island was therefore about 1,000, half the number of soldiers that France had expected to take into battle.

Between six and seven in the morning on 6 January, the first division set up defensive positions in the market while most of the town was asleep. At about eight o’clock a French patrol surprised the island’s governor, Moses Corbet, in bed in Government House (then situated at Le Manoir de La Motte). De Rullecourt convinced Corbet that thousands of French troops had already overwhelmed Jersey and threatened to burn the town and slaughter the inhabitants if Corbet did not sign a capitulation. Corbet replied that as he was a prisoner he had no authority and that anything he signed would “be of no avail”. De Rullecourt insisted and so Corbet, to avoid further harm to St Hellier, signed.

The French took him to the Royal Court building in the Royal Square and ordered him to persuade the commanders at Elizabeth Castle, Captains Aylward and Mulcaster, to surrender. Aylward refused and the troops in the castle then peremptorily fired on the French troops, killing two or three men; the French then withdrew.

With Corbet a prisoner, the next senior-most British commander was the 24-year-old Major Francis Peirson (in command of the troops at Saint Peter’s Barracks). The British troops and militia assembled on the Mont ès Pendus (now called Westmount) and Peirson soon had 2,000 men at his disposal, with which he resolved to descend the hill and attack. The French, who were camped in the market, had seized the town’s cannons and had placed them at the different openings to the market to fire on the British troops if they approached. However, the French did not find the howitzers. The British learned through different people who had been to observe the French troops that the French numbers did not exceed 800 or 900 men.

Major Peirson detached the 78th Regiment of Foot and sent them to take possession of the Mont de la Ville (now the site of Fort Regent), to block any French retreat. Once Peirson believed that the 78th had reached their destination, he ordered his remaining troops to attack. However the British were stopped at the plain, where de Rullecourt sent Corbet to offer capitulation terms and to tell the British that if they did not sign, the French would ransack the town within half an hour. Peirson and Captain Campbell answered that the French had 20 minutes to surrender.

The 83rd Regiment of Foot and the part of the East Regiment in Grouville also refused to surrender. When de Rullecourt received their answer he was heard to remark: “Since they do not want to surrender, I have come to die.”

The attack began. The British forces in the Grande Rue included the 78th Regiment, the Battalion of Saint Lawrence, the South-East Regiment and the Compagnies de Saint-Jean. The 95th Regiment of Foot, with the rest of the militia, advanced down the other avenues. The British had too many troops for the battle, a British soldier later saying that a third of the British troops would have been more than enough to destroy the French army. Many British soldiers, confused and having nothing to shoot at, fired most of their shots into the air.

The French resistance was of short duration, most of the action lasting a quarter of an hour. The French only fired the cannons that they had at their disposal once or twice. The British had a howitzer placed directly opposite the market in the Grande Rue, which at each shot “cleaned all the surroundings of French” according to a member of the British service. Major Peirson and the 95th Regiment advanced towards the Avenue du Marché; just as the British were about to win, Major Peirson was killed by a musket ball in the heart, but his saddened troops continued to fight. When de Rullecourt fell wounded, many French soldiers gave up the fight, throwing their weapons and fleeing; however, others reached the market houses, from where they continued to fire.

De Rullecourt, through Corbet, told the British that the French had two battalions and an artillery company at La Rocque, which could be at the town within a quarter of an hour. The British were not intimidated, knowing that the number of French troops there was less than 200. A guard of 45 grenadiers of the 83rd Regiment resisted against 140 French soldiers until the arrival of a part of the East Regiment, whereupon the French were defeated, with 70 prisoners taken and 30 dead or wounded. The remaining French soldiers dispersed themselves throughout the countryside to reach their boats, though several were caught while trying to do so.

It became notorious that there were traitors among the British. De Rullecourt possessed a plan of the fortifications, the towers, the cannons and so on, saying that without good friends in Jersey, he would not have come. The French knew the exact number of British troops and militia, the names of the officers commanding them, and more. In the papers found in the General’s trunk was the name of one Mr. Le Geyt, a Jerseyman who was later seized, as was another suspect.

Conway had proposed the construction of 30 coastal towers in 1778, and four had been completed by the time of the battle, however they played no part in it. Between 1781 and 1814, the government built nineteen more of Conway’s round towers and three Martello towers to improve the island’s defences.

This almost the last battle in the British Islands. The Battle of Culloden in 1746 was the last pitched battle on the British mainland; the Battle of Fishguard involved a short-lived French invasion of Wales in February 1797, and a French expeditionary force fought at the Battle of Ballinamuck in the Irish Rebellion of 1798.