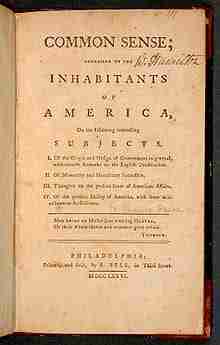 Common Sense is a pamphlet written by Thomas Paine in 1775–76 that inspired people in the Thirteen Colonies to declare and fight for independence from Great Britain in the summer of 1776. In clear, simple language it explained the advantages of and the need for immediate independence. It was published anonymously on January 10, 1776, at the beginning of the American Revolution and became an immediate sensation. It was sold and distributed widely and read aloud at taverns and meeting places. Washington had it read to all his troops, which at the time had surrounded the British army in Boston. In proportion to the population of the colonies at that time (2.5 million), it had the largest sale and circulation of any book published in American history.

Common Sense presented the American colonists with an argument for freedom from British rule at a time when the question of whether or not to seek independence was the central issue of the day. Paine wrote and reasoned in a style that common people understood. Forgoing the philosophical and Latin references used by Enlightenment era writers, he structured Common Sense as if it were a sermon, and relied on Biblical references to make his case to the people. He connected independence with common dissenting Protestant beliefs as a means to present a distinctly American political identity. Historian Gordon S. Wood described Common Sense as “the most incendiary and popular pamphlet of the entire revolutionary era”.

Thomas Paine began writing Common Sense in late 1775 under the working title of Plain Truth. With Benjamin Rush, who helped him edit and publish it and suggested changing the title, Paine developed his ideas into a forty-eight page pamphlet. He published Common Sense anonymously because of its treasonable content. Rush recommended the printer Robert Bell and promised Paine that, where other printers might say no because of the content of the pamphlet, Bell would not hesitate nor delay its printing. Paine and Bell had a falling out, but Bell still felt strongly about printing a second edition. Bell added the phrase “Written by an Englishman” to his second edition without Paine’s permission. Paine had stressed that it was “the Doctrine, not the man” that was important. Paine wanted to remain anonymous for as long as possible and felt that even such a general phrase as Bell’s addition would take attention away from the ideas in his pamphlet.

That didn’t seem to matter, though, because printed by Bell, Common Sense sold almost 100,000 copies in 1776, and according to Paine, 120,000 copies were sold in the first three months. One biographer estimates that 500,000 copies sold in the first year (in both America and Europe – predominantly France and Britain), and another writes that Paine’s pamphlet went through twenty-five published editions in the first year alone. Aside from the printed pamphlet itself, there were many handwritten summaries and whole copies circulated. At least one newspaper, the Connecticutt Courant, printed the entire pamphlet in its February 19, 1776, issue and there may have been others that did the same. While it is difficult to achieve a fixed figure for the number of circulated copies, what is certain is that Paine’s words reached far and wide out to most of America’s 2.5 million colonists. His pamphlet was read at countless town meetings and gatherings even to those who could not read.

Paine managed to carefully maintain his anonymity, even during potent newspaper polemics generated by Robert Bell, for nearly three months. His name did not become officially connected with the independence controversy until March 30, 1776. He donated his royalties from Common Sense to George Washington’s Continental Army, saying:

As the controversy with Bell, which only served to fuel the pamphlet’s sale and distribution, wore on, Paine publicly repudiated his copyright to give all colonial printers the legal right to issue their own edition.

===I. Of the Origin and Design of Government in general, with concise Remarks on the English Constitution===

Paine begins this section by making a distinction between society and government, and then goes on to consider the relationship between government and society in a state of “natural liberty”. He next tells a story of a few isolated people living in nature without government, and explains that the people find it easier to live together rather than apart; thus, they create a society. As the society grows, problems arise, and the people meet to make regulations in order to mitigate the problems. As the society continues to grow, a government becomes necessary to enforce these regulations, which over time, turn into laws. Soon, there are so many people within the society that they cannot all gather in one place to make the laws, so they begin holding elections. This, Paine argues, is the best balance between government and society. Having created this model of what the balance should be, Paine goes on to consider the Constitution of the United Kingdom.

===II. Of Monarchy and Hereditary Succession===

In the second section Paine considers monarchy first from a biblical perspective, then from a historical perspective. He begins by arguing that all men are equal at creation and, therefore, the distinction between kings and subjects is a false one. Several Bible verses are posed to support this claim. Paine then examines some of the problems that kings and monarchies have caused in the past and concludes:

In this section, Paine also attacks one type of “mixed state”{spaced ndash}the constitutional monarchy promoted by John Locke in which the powers of government are separated between a Parliament or Congress that makes the laws, and a monarch who executes them. The constitutional monarchy, according to Locke, would limit the powers of the king sufficiently to ensure that the realm would remain lawful rather than easily becoming tyrannical. According to Paine, however, such limits are insufficient. In the mixed state, power will tend to concentrate into the hands of the monarch, permitting him eventually to transcend any limitations placed upon him. Paine questions why the supporters of the mixed state, since they concede that the power of the monarch is dangerous, wish to include a monarch in their scheme of government in the first place.

===III. Thoughts on the Present State of American Affairs===

Thomas Paine suggested that a congress may be created in the following way: each colony should be divided in districts; each district would “send a proper number of delegates to Congress”. Paine thought that each colony should send at least 30 delegates to Congress, and that the total number of delegates in Congress should be at least 390. The Congress would meet annually, and elect a president. Each colony would be put into a lottery; the president would be elected, by the whole congress, from the delegation of the colony that was selected in the lottery. After a colony was selected, it would be removed from subsequent lotteries until all of the colonies had been selected, at which point the lottery would start anew. Electing a president or passing a law would require three-fifths of the congress.

===IV. On the Present Ability of America, with some Miscellaneous Reflections===

The fourth section of the pamphlet includes Paine’s optimistic view of America’s military potential at the time of the revolution. For example, he spends pages describing how colonial shipyards, by using the large amounts of lumber available in the country, could quickly create a navy that could rival the Royal Navy.

* It was absurd for an island to rule a continent.
* America was not a “British nation”; but was composed of influences and peoples from all of Europe.
* Even if Britain were the “mother country” of America, that made her actions all the more horrendous, for no mother would harm her children so brutally.
* Being a part of Britain would drag America into unnecessary European wars, and keep her from the international commerce at which America excelled.
* The distance between the two nations made governing the colonies from England unwieldy. If some wrong were to be petitioned to Parliament, it would take a year before the colonies received a response.
* The New World was discovered shortly before the Reformation. The Puritans believed that God wanted to give them a safe haven from the persecution of British rule.
* Britain ruled the colonies for her own benefit, and did not consider the best interests of the colonists in governing Britain.

There were at least two reasons why Paine’s brief pamphlet is believed to be “the most incendiary and popular pamphlet of the entire revolutionary era”. First, while the average colonist was more educated than their European counterpart, European and colonial elites agreed that common people had no place in government or political debates. Common Sense targeted a popular audience and was written in a straightforward and simple way, so Paine’s political ideas were made tangible and available to a common audience. This brought average colonists into political debate, which created a whole new political language. Illiterate colonists could hear Common Sense read at public gatherings; thusly, even the uneducated colonist was brought into this new political world. Paine’s fresh style of political writing avoided use of complex Latin phrases and instead opted for a more direct, concise style that helped make the information accessible to all. Thus, Paine’s “incendiary” words were heard even by those common folk who had never learned to read. The second reason involves the way the vast majority of colonists felt about the idea of independence from British rule. Before Common Sense was published, except for a few radical thinkers the people of the American colonies were “on the fence” about independence. Individuals were in conflict with themselves, and there were those who leaned toward reconciliation with the British crown. George Trevelyan in his History of the American Revolution had this to say about Paine’s pamphlet:

There were those in high places who, while in agreement with Paine’s sentiments, voiced criticism of his method. John Adams, who would succeed George Washington to become the new nation’s second president, in his Thoughts on Government wrote that Paine’s ideal sketched in Common Sense was “so democratical, without any restraint or even an attempt at any equilibrium or counter poise, that it must produce confusion and every evil work”. In spite of Adams’ formidable influence most people praised Paine’s brief booklet.