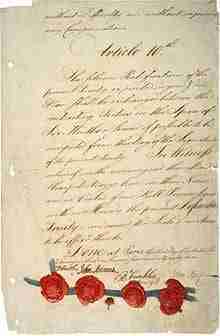 The American Congress of the Confederation ratified the Treaty of Paris on January 14, 1784 (Ratification Day). Copies were sent back to Europe for ratification by the other parties involved, the first reaching France in March 1784. British ratification occurred on April 9, 1784, and the ratified versions were exchanged in Paris on May 12, 1784. It was not for some time, though, that the Americans in the countryside received the news because of the lack of speedy communication.