On 10 January 1777, Colonel Charles Scott’s Virginia Continentals captured 70 Highlanders together with their wagons at Chatham, New Jersey. Scott’s brigade was composed of the 4th, 5th and 6th Virginia Regiments. At Connecticut Farms on 15 January, 300 New Jersey militia commanded by Colonel Oliver Spencer attacked 100 German foragers. The Americans killed one enemy soldier and captured 70 more. The following day, 350 Americans set upon a large body of British foragers at Bonhamtown, New Jersey, killing 21 enemy soldiers and wounding 30 or 40 more. American casualties are not given in any of these actions. 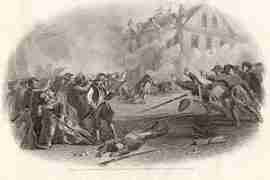