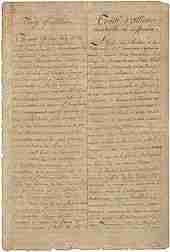 France formally recognized the United States on February 6, 1778, with the signing of the Treaty of Alliance. Hostilities soon followed after Britain declared war on France on March 17, 1778. The British naval force, then the largest fleet afloat, and French fleet confronted each other from the beginning. The British avoided intercepting a French fleet that left Toulon under the comte d’Estaing in April for North America, fearing the French fleet at Brest might then be used to launch an invasion of Britain. France had kept the Brest fleet to protect commercial shipping in European waters, and it sailed out only after a British fleet was confirmed to have left in pursuit of d’Estaing, thus weakening the British Channel fleet. In spite of this reduction the British fleet still outnumbered the French fleet at Brest, and Admiral d’Orvilliers was instructed to avoid combat when he sailed in July. D’Orvilliers met the fleet of Admiral Augustus Keppel in the indecisive Battle of Ushant on July 27, after which both fleets returned to port for repairs.