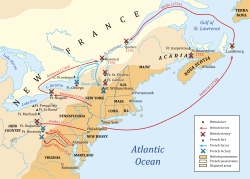 Most of the fighting between France and Britain in continental North America ended in 1760, while the fighting in Europe continued. The notable exception was the French seizure of St. John’s, Newfoundland. When General Amherst heard of this surprise action, he immediately dispatched troops under his nephew William Amherst, who regained control of Newfoundland after the Battle of Signal Hill in September 1762.

Many troops from North America were reassigned to participate in further British actions in the West Indies, including the capture of Spanish Havana when Spain belatedly entered the conflict on the side of France, and a British expedition against French Martinique in 1762.

General Amherst also oversaw the transition of French forts in the western lands to British control. The policies he introduced in those lands disturbed large numbers of Indians, and contributed to the outbreak in 1763 of the conflict known as Pontiac’s Rebellion. This series of attacks on frontier forts and settlements required the continued deployment of British troops, and was not resolved until 1766.

The war in North America officially ended with the signing of the Treaty of Paris on February 10, 1763, and war in the European theatre of the Seven Years’ War was settled by the Treaty of Hubertusburg on February 15, 1763. The British offered France the choice of surrendering either its continental North American possessions east of the Mississippi or the Caribbean islands of Guadeloupe and Martinique, which had been occupied by the British. France chose to cede the former, but was able to negotiate the retention of Saint Pierre and Miquelon, two small islands in the Gulf of St. Lawrence, along with fishing rights in the area. They viewed the economic value of the Caribbean islands’ sugar cane to be greater and easier to defend than the furs from the continent. The British, for their part, were happy to take New France, as defense was not an issue and as they already had ample places from which to obtain sugar. Spain, which traded Florida to Britain to regain Cuba, also gained Louisiana, including New Orleans, from France in compensation for its losses. Great Britain and Spain also agreed that navigation on the Mississippi River was to be open to vessels of all nations.