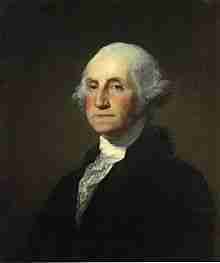 The first child of Augustine Washington (1694–1743) and his second wife, Mary Ball Washington (1708–1789), George Washington was born on their Pope’s Creek Estate near present-day Colonial Beach in Westmoreland County, Virginia. According to the Julian calendar and Annunciation Style of enumerating years, then in use in the British Empire, Washington was born on February 11, 1731; when the Gregorian calendar was implemented in the British Empire in 1752, in accordance with the provisions of the Calendar (New Style) Act 1750, his birth date became February 22, 1732.[8]

Washington’s ancestors were from Sulgrave, England; his great-grandfather, John Washington, had emigrated to Virginia in 1657.[9] George’s father Augustine was a slave-owning tobacco planter who later tried his hand in iron-mining ventures.[10] In George’s youth, the Washingtons were moderately prosperous members of the Virginia gentry, of “middling rank” rather than one of the leading planter families.[11] At this time, Virginia and other southern colonies had become a slave society, in which slaveholders formed the ruling class and the economy was based on slave labor.[12]

Six of George’s siblings reached maturity, including two older half-brothers, Lawrence and Augustine, from his father’s first marriage to Jane Butler Washington, and four full siblings, Samuel, Elizabeth (Betty), John Augustine and Charles. Three siblings died before becoming adults: his full sister Mildred died when she was about one,[13] his half-brother Butler died while an infant,[14] and his half-sister Jane died at the age of 12, when George was about 2.[13] George’s father died when George was 11 years old, after which George’s half-brother Lawrence became a surrogate father and role model. William Fairfax, Lawrence’s father-in-law and cousin of Virginia’s largest landowner, Thomas, Lord Fairfax, was also a formative influence.

Washington spent much of his boyhood at Ferry Farm in Stafford County near Fredericksburg. Lawrence Washington inherited another family property from his father, a plantation on the Potomac River which he named Mount Vernon, in honor of his commanding officer, Admiral Edward Vernon. George inherited Ferry Farm upon his father’s death and eventually acquired Mount Vernon after Lawrence’s death.[15]