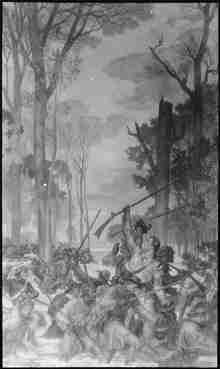 Lieutenant Colonel George R. Clark, Captain Leonard Helm and others created a plan to capture the French forts that the British occupied after Louisiana was ceded. After Kaskaskia was captured by Clark, Lieutenant Colonel Henry Hamilton sent British soldiers and reinforcements to Fort Vincennes and even helped to rebuild the fort. Spanish trader Francis Vigo, who was captured once by the British at Vincennes, found Clark and warned him of the British at the fort. Vigo gave service, ordered war supplies from the Spanish to help, and even served as a secret agent for the Patriots. Clark rounded up enough men to outnumber the British and planned a brilliant surprise attack on Fort Vincennes in the heartache of winter, a horrible time when no armies were expected to be able to attack due to illness, lack of food, and the flood waters that were high during this time. The Patriots won the Battle of Vincennes on February 23–24, 1779. Hamilton thought Poste Vincennes as “a refuge for debtors and Vagabonds from Canada.” George Rogers Clark recaptured Fort Sackville in the Battle of Vincennes without losing a single soldier. The episode was featured in the 1901 novel Alice of Old Vincennes by Maurice Thompson.[18] Also, the (now retired and scrapped) cruiser USS Vincennes (CG-49) would be named in honor of this battle; as well as the city.

Although the Americans would remain in control of Vincennes, it took years to establish peace. In 1786, Captain John Hardin led a mounted Kentucky militia across the Ohio River and destroyed a friendly Piankeshaw town near Vincennes. This led to a series of attacks and counter-attacks between Wabash Indians and American settlers. Finally, on 15 July 1786, the Wabash landed in forty-seven war canoes at Vincennes to drive the Americans back to Kentucky.[19] The Indians warned the Canadians in advance of their attack and assured them that they would not be harmed, but the Canadians warned the Americans. They quickly supplied Fort Patrick Henry and waited out the siege. One American was killed and four wounded, and the war party left after destroying the Americans’ farms.

In response, Virginia Governor Patrick Henry authorized George Rogers Clark to raise the Kentucky militia and mount an expedition against the warring tribes. General Clark gathered a force of 1,000 militia and departed Clarksville 9 September 1786, along the Buffalo Trace.[20] The militia spent ten days in Vincennes before marching north along the Wabash, but men deserted by the hundreds. Clark was soon forced to return to Vincennes without any action taken. Clark left 150 men to help defend Vincennes, but this force soon turned into a lawless mob, and the citizens of Vincennes petitioned Congress for help.[21] Secretary of War Henry Knox sent Colonel Josiah Harmar and the First American Regiment to restore order. The Kentucky militia fled Vincennes at the approach of U.S. Regulars.[22]

Colonel Harmar left 100 regulars under Major Jean François Hamtramck and directed them to build a fort, Fort Knox.[23] Vincennes remained an isolated town, difficult to supply due to its position deep within Indian territory. Secure transport to and from Vincennes meant travelling with a large, armed party, whether over land or via the Wabash River. On 30 September 1790, Major Hamtramck led 350 men from Vincennes as far north as the Vermillion River, to engage some of the Indian villages which had been at war with Vincennes. The Kickapoo tracked the party, however, and evacuated every village along the way before the Americans arrived.[24] Hamtramck destroyed some abandoned villages, but he did not engage any war parties. Faced with desertions from Kentucky militia, Hamtramck returned to Vincennes. The expedition had done no serious harm to the enemies of Vincennes, but it distracted some of the Wabash villages while Josiah Harmar, now a General, led a much larger expedition up through Ohio country towards Kekionga.

Vincennes was not secure until the conclusion of the Northwest Indian War in 1795. By 1798, the population had reached 2,500. Vincennes was no longer considered a trading outpost, but a thriving city.[25]

In 1826, “A party of Shawnee Indians … in men, women, and children, to 500, passed through this place [Vincennes] … from their reservation at Wapaghkonetta, moving to the Mississippi. The celebrated Indian prophet, and a son of the great Tecumseh, were in the company.”[26]