The “Congress of the Confederation”, or the “Confederation Congress” served as the “United States in Congress Assembled” ( a frequently used term), which was the governing body of the United States of America that existed from March 1, 1781, to March 4, 1789. It comprised delegates appointed by the legislatures or assemblies of the several States. It was the immediate successor to the Second Continental Congress, (1775-1781) and governed under the newly adopted “Articles of Confederation and Perpetual Union”, which were proposed 1776-1777, adopted by the Continental Congress in July 1778 and finally agreed to by a unanimous vote of all Thirteen States by 1781 (held over by a long dispute over the cession of western territories beyond the Appalachian Mountains to the central government led by Maryland and a coalition of smaller states without western claims. The newly reorganized Congress at the time, referred however to itself as the “Continental Congress” throughout its eight-year history (although modern historians separate the two which operated under slightly different rules and procedures both during the early American Revolutionary War and the post-war period. The membership of the “Second Continental Congress” automatically carried over to the “Congress of the Confederation” when the latter was created by the ratification of the Articles of Confederation. The “Congress of the Confederation” was succeeded by the “Congress of the United States” as provided for in the Constitution of the United States, proposed September 17, 1787, in Philadelphia and ratified by the States through 1787 to 1788 and even into 1789 and 1790.

The “Congress of the Confederation” opened in the last stages of the American Revolution. Combat ended in October 1781, with the surrender of the British after the Siege and Battle of Yorktown. The British, however, continued to occupy New York City, while the American delegates in Paris, named by the Congress, negotiated the terms of peace with Great Britain. Based on preliminary articles with the British negotiators made on November 30, 1782, and approved by the “Congress of the Confederation” on April 15, 1783, the Treaty of Paris was further signed on September 3, 1783, and ratified by Confederation Congress then sitting at the Maryland State House in Annapolis on January 14, 1784. This formally ended the American Revolutionary War between Great Britain and the thirteen former colonies, which on July 4, 1776, had declared independence. By December 1784, General George Washington, commander-in-chief of the Continental Army, had journeyed to Annapolis after saying farewell to his officers (at Fraunces Tavern) and men who had just reoccupied New York City after the departing British Army. At the Maryland State House, where the Congress met in the Old Senate Chamber, he addressed the civilian leaders and delegates of Congress and returned to them the signed commission they had voted him back in June 1775, at the beginning of the conflict. With that simple gesture of acknowledging the first civilian power over the military, he took his leave and returned by horseback the next day to his home and family at Mount Vernon near the colonial river port city on the Potomac River at Alexandria in Virginia.

On March 1, 1781, the “Articles of Confederation and Perpetual Union” were signed by delegates of Maryland at a meeting of the Second Continental Congress, which then declared the “Articles” ratified. As historian Edmund Burnett wrote, “There was no new organization of any kind, not even the election of a new President.” The Congress still called itself the “Continental Congress”. Nevertheless, despite its being generally the same exact governing body, with some changes in membership over the years as delegates came and went individually according to their own personal reasons and upon instructions of their state governments). Some modern historians would later refer to the Continental Congress after the ratification of the “Articles” as the “Congress of the Confederation” or the “Confederation Congress.” (The Congress itself continued to refer to itself at the time as the “Continental Congress.”)

The Congress had little power and without the external threat of a war against the British, it became more difficult to get enough delegates to meet to form a quorum. Nonetheless the Congress still managed to pass important laws, most notably the Northwest Ordinance of 1787.

The “War of Independence” saddled the country with an enormous debt. In 1784, the total Confederation debt was nearly $40 million. Of that sum, $8 million was owed to the French and Dutch. Of the domestic debt, government bonds, known as loan-office certificates, composed $11.5 million, certificates on interest indebtedness $3.1 million, and continental certificates $16.7 million.

The certificates were non-interest bearing notes issued for supplies purchased or impressed, and to pay soldiers and officers. To pay the interest and principal of the debt, Congress had twice proposed an amendment to the “Articles” granting them the power to lay a 5% duty on imports, but amendments to the “Articles” required the consent of all thirteen states. Rhode Island and Virginia rejected the 1781 impost plan while New York rejected the 1783 revised plan.

Without revenue, except for meager voluntary state requisitions, Congress could not even pay the interest on its outstanding debt. Meanwhile, the states regularly failed, or refused, to meet the requisitions requested of them by Congress.

To that end, in September 1786, after resolving a series of disputes regarding their common border along the Potomac River, delegates of Maryland and Virginia called for a larger assembly to discuss various situations and governing problems to meet at the Maryland state capital on the Chesapeake Bay. The later “Annapolis Convention” with some additional state representatives joining in the sessions first attempted to look into improving the earlier original Articles of Confederation and Perpetual Union”. There were enough problems to bear further discussion and deliberation that the Convention called for a wider meeting to recommend changes and meet the next year in the late Spring of 1787 in Philadelphia. The Confederation Congress itself endorsed the Call and issued one on its own further inviting the States to send delegates. After meeting in secret all summer in the “Old Pennsylvania State House” now having acquired the nickname and new title of “Independence Hall”, from the famous action here eleven years earlier. Independence Hall. The Philadelphia Convention, under the presidency of former General George Washington instead of a series of amendments, or tinkering with the old charter, issued a proposed new “Constitution for the United States” to replace the 1776-1778 “Articles”. The Confederation Congress received and submitted the new Constitution document to the States, and the Constitution was later ratified by enough states (nine were required) to become operative in June 1788. On September 12, 1788, the Confederation Congress set the date for choosing the new “Electors” in the “Electoral College” that was set up for choosing a President as January 7, 1789, the date for the Electors to vote for the President as on February 4, 1789, and the date for the Constitution to become operative as March 4, 1789, when the new Congress of the United States should convene, and that they at a later date set the time and place for the “Inaguration” of the new first “President of the United States]]”.

The “Congress of the Confederation” continued to conduct business for another month after setting the various dates. On October 10, 1788, the Congress formed a quorum for the last time; afterwards, although delegates would occasionally appear, there were never enough to officially conduct business, and so the “Congress of Confederation” passed into history. The last “meeting” of the “Continental Congress” was held March 2, 1789, two days before the new Constitutional government took over; only one member was present at said meeting, Philip Pell, an ardent Anti-Federalist and opponent of the Constitution, who was accompanied by the Congressional secretary. Pell oversaw the meeting and adjourned the Congress “sine die”. 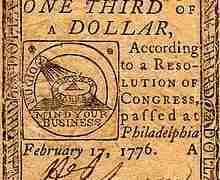