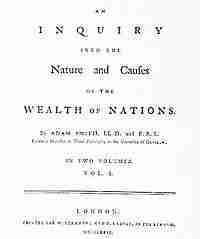 Many other authors were influenced by the book and used it as a starting point in their own work, including Jean-Baptiste Say, David Ricardo, Thomas Malthus and, later, Ludwig von Mises. The Russian national poet Aleksandr Pushkin refers to The Wealth of Nations in his 1833 verse-novel Eugene Onegin.

Irrespective of historical influence, The Wealth of Nations represented a clear shift in the field of economics, similar to Sir Isaac Newton’s Principia Mathematica for physics, Antoine Lavoisier’s Traité Élémentaire de Chimie for chemistry, or Charles Darwin’s On the Origin of Species for biology.