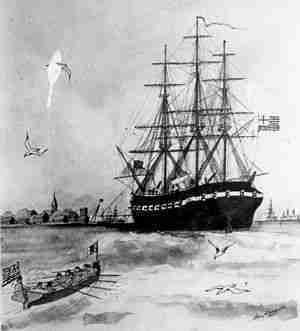 The Battle of Block Island (April 6, 1776) was a nighttime naval encounter between the Continental Navy, returning from a successful raid on Nassau in The Bahamas on its maiden voyage, and {HMS|Glasgow|1757|6}, a Royal Navy dispatch boat. Glasgow successfully escaped capture by a fleet of seven ships under the command of Commodore Esek Hopkins, although she sustained significant damage in the encounter.

Several of the ship captains of the Continental fleet were criticized for their actions in the engagement, and one was dismissed as a result. Commodore Hopkins was criticized for other actions pertaining to the cruise, including the distribution of seized goods, and was eventually also dismissed from the Navy.

The Second Continental Congress had established the Continental Navy in late 1775. By February 1776 the first ships of the fleet were ready for their maiden voyage, and Commodore Esek Hopkins led a fleet of eight ships on an expedition to the Bahamas, where the British were known to have military stores. In early March, the fleet (reduced by one due to tangled riggings en route) landed marines on the island of New Providence and captured the town of Nassau. After loading the fleet’s ships, enlarged to include two captured prize ships, with military stores, the fleet sailed north on March 17, with one ship dispatched to Philadelphia, while the rest of the fleet sailed for the Block Island channel. The fleet’s cruise was marked by outbreaks of a variety of diseases, including fevers and smallpox, resulting in significant reductions in crew effectiveness.

By April 4 the fleet had reached the waters off Long Island, and captured a prize, {HMS|Hawk|1775|6}, which was also laden with supplies. The next day brought a second prize, the Bolton. Hoping to catch more easy prizes, Hopkins continued to cruise off Block Island that night, forming the fleet into a scouting formation of two columns. The right, or eastern, column was headed by the {USS|Cabot|1775|6}, followed by Hopkins’ flagship, the {USS|Alfred|1774|6}, at 20 guns the largest ship of the fleet, and the left column was headed by the {USS|Andrew Doria|1775|6}, followed by the {USS|Columbus|1775|6}. Behind these came the {USS|Providence|1775|6}, with {USS|Fly|1776|6} and {USS|Wasp|1775|6} trailing further behind as escorts for the prizes. The need to provide crews for the prizes further reduced the fighting effectiveness of the fleet’s ships.

That night was an exceptionally clear night with a nearly full moon. Between 1 and 2 am on April 6, with the fleet headed in a generally southerly direction, Andrew Doria and Glasgow spotted each other about 8 leagues (20 to 24 nautical miles) southeast of Block Island. Glasgow was heading westerly, destined for Charleston. Captain Howe came about to investigate the fleet, and over the next 30 minutes closed to within hailing distance. Commodore Hopkins gave no signals during this time, so the fleet formed no battle line which resulted in a battle that Captain Nicholas Biddle of the Andrew Doria later described as “helter-skelter”.

Howe first came upon the Cabot, whose captain was Esek Hopkins’ son, John. The younger Hopkins, when hailed for identification, replied, “The Columbus and Alfred, a 22-gun frigate.” An overzealous seaman on his ship then tossed a grenade onto the Glasgow{‘s} deck, and the battle was engaged. Cabot, a lightly armed brig, fired one ineffective broadside of six-pounders. Glasgow countered with two broadsides with its heavier weaponry, killing Cabot{‘s} master, wounding Hopkins, and disabling her steering. As she drifted away, the Alfred came up to engage Glasgow, and the two engaged in a broadside duel. A shot from Glasgow early in the action broke the lines to Alfred{‘s} tiller; her temporary loss of steering exposed her to raking fire. Her drift also made it difficult for the Andrew Doria to join the action, who also had to maneuver to avoid the drifting Cabot. The Providence held back, and Columbus was eventually able to join the action late, but her fire was so wild that little to no damage was done to Glasgow.

With Glasgow now exposed to fire from three ships, Howe decided to break off the battle in order to avoid being boarded, and made sail for Newport. Despite extensive damage to sail and rigging, he pulled away from the pursuing fleet, which was fully laden with its captured goods. After several hours of chase, lasting into daylight, Hopkins called off the chase to avoid an encounter with the British squadron at Newport. His only prize was Glasgow{‘s} tender, which the fleet brought to anchor in New London, Connecticut on April 8.

The Glasgow suffered only four casualties, one killed and three wounded. This count demonstrated the poor quality of the Continental fleet’s gunnery: all of the casualties were due to musket fire. Aboard the Cabot there were four killed and seven wounded, and the Alfred had six each killed and wounded; Andrew Doria{‘s} drummer was also wounded.

Although Continental Congress President John Hancock praised Hopkins for the fleet’s performance, its failure to capture the Glasgow gave opponents of the Navy in and out of Congress opportunities for criticism. Nicholas Biddle wrote of the action, “A more imprudent, ill-conducted affair never happened.” Abraham Whipple, captain of the Columbus, endured rumors and accusations of cowardice for a time, but eventually asked for a court martial to clear his name. Held on May 6 by a panel consisting of officers who had been on the cruise, he was cleared of cowardice, although he was also criticized for errors of judgment. John Hazard, captain of the Providence, was not so fortunate. Charged with a variety of offenses by his subordinate officers, including neglect of duty during the Glasgow action, he was convicted by court martial and forced to surrender his commission.

Commodore Hopkins came under scrutiny from Congress over matters unrelated to this action. He had violated his written orders in sailing to Nassau instead of Virginia and the Carolinas, and he had distributed the goods taken during the cruise to Connecticut and Rhode Island without consulting Congress. He was censured for these transgressions, and dismissed from the Navy in January 1778 after further controversies, including the fleet’s failure to sail again (a number of its ships suffered from crew shortages, and also became trapped at Providence, Rhode Island by the British occupation of Newport late in 1776).

Glasgow, suffering from the battle and having dumped her dispatches, returned to Newport. She was found to be in bad enough shape that she was made as seaworthy as possible and sent to Portsmouth for repairs. Her mission was reassigned to {HMS|Nautilus|1762|2}, another ship in the Newport squadron.