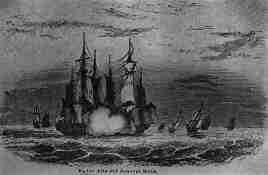 The Battle of Delaware Bay, or the Battle of Cape May, was a naval engagement fought between the Kingdom of Great Britain and United States during the American Revolutionary War. A British squadron of three vessels attacked three American privateers, which were escorting a fleet of merchantmen. The ensuing combat in Delaware Bay, near Cape May, ended with an American victory over a superior British force.

Twenty-three-year-old Lieutenant Joshua Barney of the Continental Navy commanded the privateer sloop Hyder Ally during the battle. She was owned by Pennsylvania business man John Willcocks and was issued a letter of marque. The sloop-of-war was armed with sixteen 6-pounders and had a crew of about 110 men, officers and marines and was named Hyder Ally after Hyder Ali, the ruler of the Kingdom of Mysore on the Indian subcontinent and a British enemy. Also with Lieutenant Barney was the privateer sloops Charming Sally of ten guns and the twelve gun General Greene. Barney’s first command was to escort a rebel fleet of five merchantmen to the Delaware Bay. During this cruise, three British ships were sighted and a battle began. British forces included the 32-gun frigate HMS Quebec under Captain Christopher Mason, the twenty-four gun sloop-of-war HMS General Monk under Captain Josiah Rodgers and a New York privateer brig named Fair American crewed by American loyalists. The Fair American was the former American privateer General Washington commanded by Silas Talbot at her capture.

At nightfall of April 7, 1782, the American convoy anchored within Cape May due to the wind which had died down to a calm. Later that night the British in HMS Quebec and General Monk sighted the enemy fleet and anchored off the cape and made preparations to attack the Hyder Ally, which was considered the most formidable ship of the fleet. Unaware of the British vessels nearby, the Americans spent the night believing they were safe. The following morning three British privateers were spotted and Captain Mason signaled them to join him. Only the Brig Fair American responded. At 10:00 am the Americans sighted the British vessels approaching, so Lieutenant Barney ordered the merchantmen to flee up into the Delaware Bay under the protection of General Greene and the Charming Sally while the Hyder Ally remained behind to engage.

The fleet was directed to sail as close to the shoreline as possible so as to not allow a pursuit. The larger British vessels would have a hard time following in the shallow water. General Greene disobeyed Barney’s orders and prepared for battle and the Charming Sally grounded on a shoal and was abandoned by her crew. At about 11:00 am the three British vessels were identified by the Americans. HMS Quebec stood off the nearby Cape Henlopen to prevent the Americans from escaping Cape May into the Atlantic but this was unnecessary as the Americans were headed into the bay rather than into open sea. The Fair American led the advance with General Monk behind. Sometime after 12:00 pm the British came within range of the two American privateers. To try to lure the General Monk closer, Lieutenant Barney turned about as if attempting to flee. The Fair American opened fire with a broadside followed by another; the shots were accurate but caused little damage.

Still in a fake retreat, Hyder Ally{‘}s gun ports remained closed and no shots had yet been fired by the Continentals. General Greene did the same as Hyder Ally and turned around but she grounded just outside of British gun range. The trick worked; Fair American broke off the effort to attack the General Greene as HMS General Monk proceeded forward to attack the Hyder Ally. Fortunately for Continental forces, the Fair American grounded in shallow water and was permanently put out of the action due to damage to her hull. Heading forward, Captain Rodgers decided to slow down and launch a boat to take the abandoned Charming Sally, after which he continued on until he caught up with the ‘Hyder Ally. When within range of pistols, Captain Rodgers ordered her to surrender. Barney answered with a broadside of grape, canister and round shot which raked the deck of the British sloop, killing some sailors and marines. General Monk replied with her bow guns due to them being the only weapons bearing down on the Americans at the time.

Barney ordered his ship to port and unleashed another broadside; these shots passed through the sails and rigging of General Monk and damaged her main and top-gallant masts. Before the battle the British bored their 6-pounders on the General Monk to fire 9-pounder balls. This proved fatal when the British came within a few yards off Hyder Ally{‘}s beam for a full broadside of their own, but when they fired, the guns of the General Monk tore up from the deck and flipped over. Several sailors burned themselves as they tried to turn their guns back over. A few minutes later the two sloops had drifted close enough together to where the British and Americans could hear each other shouting commands. Barney took the opportunity to reload his cannon but he did not give his gunners the order to open fire. Instead the lieutenant shouted “hard a-port, do you want him to run abroad of us”, another trick. Hearing this, Captain Rodgers ordered his ship to port as Lieutenant Barney ordered his vessel to starboard.

As a result, the two vessels collided and became entangled in each other’s rigging. The American sailors fastened the General Monk to their ship to prevent her from breaking loose and then fired their broadside. The shots knocked out some of the British guns and sent the crew into confusion. The American marines sat high in the rigging of the Hyder Ally and poured musketry into the British. Barney’s men boarded while he remained on top of the compass box to direct the attack. About this time the box was shot out from under the lieutenant but he suffered only a slight injury. Barney also ordered that his port-side guns be turned around to the starboard so they could assist in the battle. After only twenty-six minutes of close-quarters combat, Captain Rodgers was wounded and all of his officers were killed except a midshipman who struck the colors.

A total of twenty Britons died and thirty-three were wounded. The General Monk was captured and the Fair American was aground and stranded so Captain Mason in HMS Quebec fled without actually engaging in the fight. American forces suffered the loss of four killed and eleven wounded. The Charming Molly was captured without a fight, the Hyder Ally was damaged considerably and the General Greene was grounded but refloated after HMS Quebec began her retreat.

The Americans won the day and Lieutenant Joshua Barney was given command of the prize HMS General Monk which had well over 300 shot-holes in her sides. He was then ordered to France to deliver dispatches to Benjamin Franklin before joining the French Navy after the war ended. During the War of 1812, Barney was a captain and commanded the Chesapeake Bay Flotilla and later commanded marines and sailors at the Battle of Bladensburg. Later the story of the Delaware Bay action was put into print by Myron V. Brewington, author of the book The Battle of Delaware Bay, 1782.