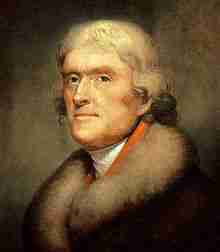 The third of ten children, Thomas Jefferson was born on April 13, 1743 (April 2, 1743 OS) at the family home in Shadwell, Goochland County, Virginia, now part of Albemarle County.[2] His father was Peter Jefferson, a planter and surveyor.[3] He was of possible Welsh descent, although this remains unclear.[4] His mother was Jane Randolph, daughter of Isham Randolph, a ship’s captain and sometime planter. Peter and Jane married in 1739.[5] Thomas Jefferson showed little interest in learning about his ancestry; he only knew of the existence of his paternal grandfather.