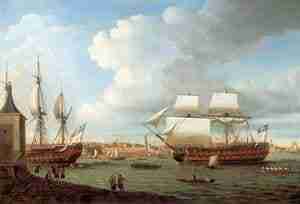 The Third Battle of Ushant or the Action of 20–21 April 1782 was a naval battle fought during the American War of Independence, between a French fleet of three ships of the line protecting a convoy and two British ships of the line off Ushant, a French island at the mouth of the English Channel off the north-westernmost point of France. This was the third battle that occurred in this region during the course of the war.[1]

On 20 April the 84-gun ship HMS Foudroyant, Captain John Jervis, attached to the fleet of Vice-Admiral Samuel Barrington, off Ushant, was ordered, with other ships, in chase of a French fleet. The French convoy comprised nineteen transports and the 64-gun Actionnaire armed en flûte;[2] it was escorted by the 74-gun Protecteur and Pégase, and the frigates Indiscrète and Andromaque.[3]

At sunset the Foudroyant had got far ahead of her consorts, and near enough to the French ships and made them out to be a convoy, and four ships of war, two being line-of-battle ships of which were Pégase and Actionnaire. The squadron soon afterwards separated and the largest ship the 1,778 tons Pégase which the Foudroyant was pursuing, also bore up. A hard squall with hazy weather, coming on about the same time the Foudroyant lost sight of the fleet, and about half an hour after midnight brought the chase to close action. After engaging about three-quarters of an hour, the Foudroyant boarded the Pégase, and compelled her commander Chevalier de Sillaus to surrender. Out of a crew of 700 men, she had upwards of 100 killed and wounded while the rest had surrendered. Only two or three men were wounded in the Foudroyant. With other ships arriving up, the Pégase was taken possession of.

Meanwhile the 90 gun HMS Queen, captained by Frederick Maitland, next day captured the other French ship Actionnaire after an action which lasted less than twenty minutes, armed en flute (in this case a storeship and only partially armed with 24 guns with a crew of less than 250) the French ship surrendered being after being totally outgunned. Most of the French convoy had now scattered but in total twelve other transports and merchants were captured by the British.[4]

What was found on the Actionnaire were eleven chests of Dutch silver on board, and also lower masts for four seventy-fours, with sails and rigging complete besides her own masts, which were intended for the recently captured HMS Hannibal off Sumatra renamed (Petit Annibal). The capture of the majority of the convoy was a huge blow to the Bali de Suffren.[5] The British loss was minimal with only a total of five men were wounded and moderate damage to the their ships.

The Pégase was used in the Royal Navy and commissioned as the third rate HMS Pegase. She served as a prison ship from 1799, and was used in this role until 1815 when she was broken up. John Jervis was knighted for this action.[6]