An act for the impartial administration of justice in the cases of people questioned for any acts done by them in the execution of the law, or for the suppression of riots and tumults, in the province of the Massachuset’s Bay, in New England.

Whereas in his Majesty’s province of Massachuset’s Bay, in New England, an attempt hath lately been made to throw off the authority of the parliament of Great Britain over the said province, and an actual and avowed resistance, by open force, to the execution of certain acts of parliament, hath been suffered to take place, uncontrouled and unpunished, and whereas in the present disordered state of the said province it is of the utmost importance to the reestablishment of lawful authority throughout the same. That neither the magistrates acting in support of the laws, nor any of his Majesty’s subjects aiding and assisting them therein, or in the suppression of riots and tumults, should be discouraged from the proper discharge of their duty, by an apprehension, that in case of their being questioned for any acts done therein, they may be liable to be brought to trial for the same before persons who do not acknowledge the validity of the laws. In the execution thereof, or the of the magistrate in support of whom, such acts had been done: in order therefore to remove every such discouragement from the minds of his Majesty’s subjects, and to induce them, upon all proper occasions, to exert themselves in support of the public peace of the province, and of the authority of the King and Parliament of Great Britain over the same; be it enacted …, That if any inquisition or indictment shall be found, or if any appeal shall be sued or preferred against any person, for murther, or other capital offense, in the province of the Massachuset’s Bay, and it shall appear, by information given upon oath to the governor … of the said province, that the fact was committed by the person against whom such inquisition or indictment shall be found, or against whom such appeal shall be sued or preferred, as aforesaid, either in the execution of his duty as a magistrate, for the suppression of riots, or in the support of the laws of revenue, or in acting in his duty as an officer of revenue, or in acting under the direction and order of any magistrate, for the suppression of riots, or for the carrying into effect the laws of revenue, or in aiding and assisting in any of the cases aforesaid; and if it shall also appear, to the satisfaction of the said governor … that an indifferent trial cannot be had within the said province, in that case, it shall and may be lawful for the governor …, to direct, with the advice and consent of the council, that the inquisition, indictment, or appeal, shall be tried in some other of his Majesty’s colonies, or in Great Britain; and for that purpose, to order the person against whom such inquisition or indictment shall be found, … to be sent, under sufficient custody, to the place appointed for his trial, or to admit such person to bail, taking a recognizance … from such person, with sufficient sureties, … in such sums of money as the said governor … shall deem reasonable, for the personal appearance of such person, if the trial shall be appointed to be had in any other colony, before the governor, … of such colony; and if the trial shall be appointed to be had in Great Britain, then before his Majesty’s court of King’s Bench, at a time to be mentioned in such recognizances; and the governor, … or court of King’s Bench, where the trial is appointed to be had in Great Britain, upon the appearance of such person, according to such recognizance, or in custody, shall either commit such person, or admit him to bail until such trial…. II

And, to prevent a failure of justice, from the want of evidence on the trial of any such inquisition, indictment or appeal, be it further enacted, That the governor … is hereby authorised and required, to bind in recognizances to his Majesty all such witnesses as the prosecutor or person against whom such inquisition or indictment shall be found, or appeal sued or preferred, shall desire to attend the trial of the said inquisition, … for their personal appearance, at the time and place of such trial, to give evidence: and the said governor … shall thereupon appoint a reasonable sum to be allowed for the expenses of every such VI

[Persons brought before justices etc. accused of any capital crime in the execution of their duty, to be admitted to bail.] VIII

And be it further enacted … That this act … shall … be, and continue in force, for and during the term of three years. 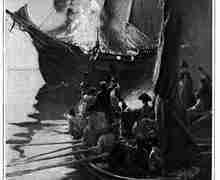