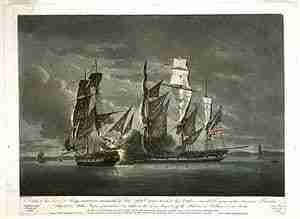 The Battle off Halifax took place on 28 May 1782 during the American Revolutionary War. It involved the American privateer Jack and the 14-gun Royal Naval brig {HMS|Observer|1781|6} off Halifax, Nova Scotia. Captain John Ropes commanded Jack, and Lieutenant John Crymes commanded Observer. The battle was “a long and severe engagement.”

During the American Revolution, Americans regularly attacked Nova Scotia by land and sea. American privateers devastated the maritime economy by raiding many of the coastal communities, such as the numerous raids on Liverpool and on Annapolis Royal.

The engagement between Jack and Observer was one of several in the region. On 10 July 1780, the British privateer brig Resolution (16 guns) under the command of Thomas Ross engaged the American privateer Viper (22 guns and 130 men) off Halifax at Sambro Light. In what one observer described as “one of the bloodiest battles in the history of privateering”, the two privateers began a “severe engagement” during which both pounded each other with cannon fire for about 90 minutes. The engagement resulted in the death of possibly 18 British and 33 American sailors.

Jack herself was involved in a previous naval engagement. Jack (or Saucy Jack) was originally a Massachusetts privateer commissioned in September 1779. After three successful cruises in which she captured a number of prizes, {HMS|Pandora|1779|6} and {HMS|Danae|1779|6} captured her in July 1780 in the St. Lawrence River. The British took Jack into the Quebec Provincial Marine, though she was commissioned out of Nova Scotia. She then served as a patrol vessel for the fisheries and the St. Lawrence River. In an engagement off Cape Breton with two French frigates at Spanish River, near Cape Breton Island in 1781 two French frigates captured her. They took Jack back to Boston, where her previous owners purchased her and sent her to sea again as a privateer.

Observer was herself a former Massachusetts privateer, originally built as a merchantman, the Amsterdam, which {HMS|Amphitrite|1778|6} captured on 19 October 1781. The British sent Amsterdam into Halifax to be condemned as a prize, where the Royal Navy bought her.

Observer was returning to Halifax, having rescued ten crew members of HMS Blonde after Blonde wrecked on Seal Island off Cape Sable Island. On 28 May 1782, as Observer arrived at the Sambro Island Light near the mouth of Halifax Harbour, Jack approached her. When Jack discovered her quarry was a British naval vessel, the Americans tried to escape.

Observer chased Jack for two hours before catching her. The ships were evenly matched. The British immediately killed the American captain John Ropes as a result of the cannon fire. Both ships had numerous holes shot through their sails, and the British sailors attempted to climb the rigging of their ship in an effort to board the American privateer. The Americans repulsed this initial boarding attempt, but the British were ultimately successful. Jack struck her colours on the afternoon of 29 May.