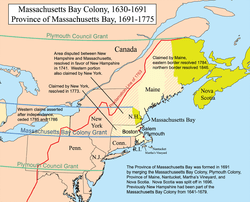 The Constitution of the Commonwealth of Massachusetts is the fundamental governing document of the Commonwealth of Massachusetts, one of the 50 individual state governments that make up the United States of America. As a member of the Massachusetts Constitutional Convention of 1779, John Adams was the document’s principal author. Voters approved the document on June 15, 1780. It became effective on October 25, 1780, and remains the oldest functioning written constitution in continuous effect in the world. It was also the first constitution anywhere to be created by a convention called for that purpose rather than by a legislative body.

The Massachusetts Constitution was written last of the original state’s first constitutions. Rather than taking the form of a list of provisions, it was organized into a structure of chapters, sections, and articles. It served as a model for the Constitution of the United States of America, drafted seven years later, which used a similar structure. It also influenced later revisions of many other state constitutions. The Massachusetts Constitution has four parts: a preamble, a declaration of rights, a description of the framework of government, and articles of amendment.

In the spring of 1775, Adams took the position that each state should call a special convention to write a constitution and then submit it to a popular vote. He told the Continental Congress that:

The legislative body of Massachusetts, known as the Massachusetts General Court, instead drafted its own version of a constitution and submitted it to the voters, who rejected it in 1778. That version did not provide for the separation of powers, not did it include a statement of individual rights. The General Court then organized the election of delegates from each town to participate in a convention that would draft a constitution and submit their work to a popular vote with the understanding that its approval would require approval by two-thirds of the voters. The constitutional convention met in Cambridge in September 1779.

The convention sat from September 1 to October 30, 1779. Its 312 members chose a committee of thirty members to prepare a new constitution and declaration of rights. That committee asked Adams to draft a declaration of rights. It appointed a subcommittee of James Bowdoin, Samuel Adams, and John Adams to draft the constitution and that trio delegated the drafting to John Adams alone. He later wrote that he constituted a “sub-sub committee of one”. An article on religion was referred to members of the clergy, which resulted in a form of religious establishment entirely unlike that later adopted at the federal level. Adams advocated for an end to that establishment when revisions to the constitution were considered in 1820 and his views were adopted in 1832.

Adams’s draft declaration of rights read in part: “All men are born equally free and independent…” Before being adopted by the constitutional convention it was revised to read: “All men are born free and equal…” At the insistence of Adams, the document referred to the state as a “commonwealth.”

Male voters 21 years or older ratified the constitution and declaration of rights that the convention on June 15, 1780, and it became effective on October 25, 1780.

The preamble of the constitution bears some resemblance to the United States Constitution’s in a few phrases near the end. It reads:

The body politic is formed by a voluntary association of individuals: it is a social compact, by which the whole people covenants with each citizen, and each citizen with the whole people, that all shall be governed by certain laws for the common good. It is the duty of the people, therefore, in framing a constitution of government, to provide for an equitable mode of making laws, as well as for an impartial interpretation, and a faithful execution of them; that every man may, at all times, find his security in them.

==Part the First: A Declaration of the Rights of the Inhabitants of the Commonwealth of Massachusetts==

This part consists of thirty articles. The first states:

This Article was the subject of a landmark case in 1781 before a Massachusetts court sitting in Great Barrington, Brom and Bett v. Ashley. Elizabeth Freeman (whose slave name was “Bett”), a black slave owned by Colonel John Ashley, sued for her freedom based on this article. The jury agreed that slavery was inconsistent with the Massachusetts Constitution and awarded Freeman £5 in damages and her freedom. A few years later, Quock Walker, a black slave, sued his master for false imprisonment; the jury found for Walker, and awarded him damages of £50. His master was then subject to criminal prosecution for assault and battery against Walker and was found guilty by a jury, which imposed a fine of 40/- (£2). In this manner, slavery lost any and all legal protection in Massachusetts, making it a tortious act under the law, effectively abolishing it within the Commonwealth.{cn|date=August 2013}

This Article was also the basis for the 2003 Supreme Judicial Court’s ruling in Goodridge v. Department of Public Health that required the Commonwealth to extend marriage rights to same-sex couples on an equal basis with different-sex couples.

This article was later amended to substitute the word “people” for the word “men”.

The next several Articles within the “Part the First” in the original 1780 Constitution of Massachusetts called upon the people of the Commonwealth as being their “right as well as the duty of all men” (Article II) to a strong religious conviction and belief.

Article III continued in bringing attention to the people of the Commonwealth of Massachusetts that “the happiness of a people” and “preservation of civil government” is explicitly tied to religion and morality. Further, that “support and maintenance of public Protestant teachers of piety, religion, and morality” be an active element of the civil government.

And the people of this commonwealth have also a right to, and do, invest their legislature with authority to enjoin upon all the subject an attendance upon the instructions of the public teachers aforesaid, at stated times and seasons, if there be any on whose instructions they can conscientiously and conveniently attend.

Provided, notwithstanding, That the several towns, parishes, precincts, and other bodies-politic, or religious societies, shall at all times have the exclusive right and electing their public teachers and of contracting with them for their support and maintenance.

==Part the Second: The Frame of Government==

Chapter I, Section I

The opening of the “Part the Second” lays down the official name of the State of Massachusetts.

The first three articles in Chapter I, Section I,of the Massachusetts Constitution establishes the three primary branches of government; an executive, a bicameral legislature, and an independent judiciary. The design of this system, unique at the time, was created to ensure the proper separation of power between the different entities. The framers of the state constitution used this tool to prevent the abuse of power by any one branch.

One hundred and twenty Articles of Amendment have been added to the Massachusetts Constitution. The most recent, which disqualified incarcerated felons from voting, was approved by a vote of 60.3% to 33.9% in 2000.

The amendment process is governed by the 48th Article of Amendment to the Constitution, which establishes an “indirect initiative” process that requires action by the state legislature followed by a referendum. For an amendment to be placed before the voters as a referendum, a state constitutional convention–a joint meeting of both houses of the legislature sitting as one body–in each of two successive two-year legislative sessions must provide the required number of votes. That number varies according to how the proposed amendment comes before the convention. If it is a legislative amendment, i.e., one legislator has proposed, the threshold is 50% of the members. If it is an initiative amendment, i.e., one put forward by petition, the threshold is 25% of the members. In both cases, the calculation of the votes is based on the number of seats in the constitutional convention, not members present or seated. The number of certified signatures required on the petitions is 3% of the total vote cast for all candidates for governor (excluding blanks) at the immediately preceding state election.