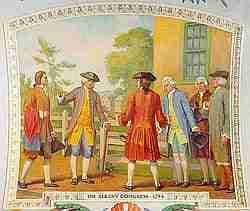 The Albany Congress (1754), also known as, “The Conference of Albany” was a meeting of representatives sent by the legislatures of the northern seven of the thirteen British North American colonies (specifically, Connecticut, Maryland, Massachusetts, New Hampshire, New York, Pennsylvania, and Rhode Island). Representatives met daily at Albany, New York from June 19 to July 11, 1754 to discuss better relations with the Indian tribes and common defensive measures against the French threat from Canada in the opening stage of the French and Indian War, the North American front of the Seven Years War between Great Britain and France. Delegates did not have the goal of creating an American nation; rather, they were colonists with the more limited mission of pursuing a treaty with the Mohawk and other major Iroquois tribes.

This was the first time colonists had met together and it provided a model that came into use in setting up the Stamp Act Congress in 1765 as well as the First Continental Congress in 1774, which were preludes to the American Revolution.

The Albany Congress was the first time in the 18th century that colonial representatives met to discuss some manner of formal union. In the 17th century, some New England colonies had formed a loose association called the New England Confederation, principally for purposes of defense, as raiding by French and allied tribes was frequent. In the 1680s, King James II imposed the Dominion of New England as a unifying government on the colonies between the Delaware River and Penobscot Bay; it was dissolved in 1689. Jacob Leisler summoned an intercolonial congress, which met in New York on 1 May 1690, to plan concerted action against the French and Indians. Because of differences in threat, he attracted only the colonies as far south as Maryland.

==History of the meeting==

The Albany delegates spent most of their time debating Benjamin Franklin’s Albany Plan of union to create a unified level of colonial government. The delegates voted approval of a plan that called for a union of 11 colonies, with a president appointed by the British Crown. Each colonial assembly would send 2 to 7 delegates to a “grand council,” which would have legislative powers. The Union would have jurisdiction over Indian affairs.

The plan was rejected by the colonies’ legislatures, which were jealous of their powers, and by the Colonial Office, which wanted a military command. Much of the elements of the plan were later the basis for the American governments established by the Articles of Confederation of 1777 and the Constitution of 1787. Franklin speculated that had the 1754 plan been adopted, the colonial separation from England might not have happened so soon.

The Congress and its Albany Plan have achieved iconic status as presaging the formation of the United States of America in 1776. It is often illustrated with Franklin’s famous snake cartoon, “Join or Die!” Historians generally reject the popular notion that the delegates were inspired by the Iroquois Confederation, as they were more familiar with English precedents, examples, and political philosophy that were incorporated into the plan. .

Benjamin Franklin’s plan to unite the colonies exceeded the scope of the congress, which had been called to plan a defense to the French and Indian threat. The original plan was heavily debated by all who attended the conference including the young Philadelphia lawyer Benjamin Chew. Numerous modifications were also proposed by Thomas Hutchinson, who later became Governor of Massachusetts. The delegates passed the plan unanimously. They submitted it with their recommendations, but the legislatures of the seven colonies rejected it, as it would have removed some of their existing powers. The plan was never sent to the Crown for approval, although it was submitted to the British Board of Trade, which also rejected it.

The Plan of Union proposed to include all the British North American colonies (note the “Lower Counties on the Delaware” were then administered by Pennsylvania, and Georgia Colony was slow to start) although none of the colonies south of Maryland sent representatives to the Albany Congress. The plan called for a single executive (President-General) to be appointed by the King, who would be responsible for Indian relations, military preparedness, and execution of laws regulating various trade and financial activities. It called for a Grand Council to be selected by the colonial legislatures, with the number of delegates to be apportioned according to the taxes paid by each colony. Although the colonial assemblies rejected the plan, delegates forming the government after the Revolution incorporated some features of this plan in the Articles of Confederation and the Constitution.

In 1789 Benjamin Franklin said of the plan:

‡ Indicates Members of the committee of the Plan of Union