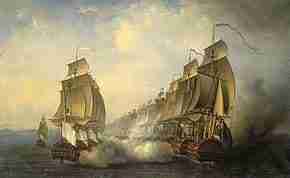 The Battle of Cuddalore was a battle between a British fleet under Admiral Sir Edward Hughes and a slightly smaller French fleet under the Bailli de Suffren off the coast of India near Cuddalore during the American Revolutionary War, which in 1780 had sparked the Second Mysore War in India. The battle took place on 20 June 1783, after peace had been signed in Europe but before the news had reached India. It was the final battle of the American Revolutionary War.

On the death of French ally Hyder Ali, the British decided to retake Cuddalore, and marched some troops from Madras, and began preparing for a siege. The French fleet under Suffren appeared off the port on 13 June. A week of fickle winds prevented either side from engaging, but on 20 June Suffren attacked. No ships were seriously damaged, though casualties were high with both sides losing about 100 men dead and 400 wounded. The British fleet retreated to Madras after the action, preventing the landing of transports carrying additional troops to reinforce the siege. A sortie from the town weakened the British forces, which were likely to have raised the siege if word had not arrived on 29 June that a preliminary peace had been agreed between France and Britain.

Following the death of French ally Hyder Ali, the ruler of Mysore, in December 1782, British commanders at Madras decided to attempt the recapture of Cuddalore, which Hyder Ali had captured in April of that year. The army marched south from Madras, and, circling around the city, encamped to its south. The British fleet, the 18 ships of the line under Admiral Sir Edward Hughes, anchored advantageously to the south Cuddalore in order to protect the army and its supply ships. By early June 1783 the siege was under way.

French Admiral the Bailli de Suffren was ordered on 10 June to sail with his inferior fleet of 15 ships from Trincomalee in support of the besieged city. When he arrived on 13 June, Hughes, seeking to avoid battle, moved away from the city and again anchored. After five days of adverse winds, Suffren was able to anchor near the city, where he made contact with the city’s commander Sayed Sahib of Mysore. Since it appeared that the success of the siege would be decided by naval action, 1,200 troops were embarked onto Suffren’s ships to increase his gunnery complement. His fleet weighed anchor on 18 June, and the two fleets began maneuvering for advantage.

Both fleets were at first frustrated by light and changeable winds. When a consistent west wind appeared on 20 June, Hughes lined up for battle on a northward-trending port tack and awaited Suffren’s action. Lining up in a similar formation, Suffren gave to the order to attack, and battle was engaged shortly after 4 pm. The action lasted until about 7 pm, and there was no major damage done to ships in either fleet, even though all ships were engaged.

Suffren’s fleet anchored about 25 miles north of Cuddalore after the battle, while Hughes anchored near the city. On 22 June he sighted the French fleet there while he was en route back to Madras. A number of his ships had been disabled, and he reported that many men were suffering from scurvy and that he was short of water.

Suffren returned to Cuddalore on 23 June, forcing the British supply fleet to withdraw. In addition to returning the 1,200 troops he had borrowed from the city’s garrison, he landed an additional 2,400 men to support the defense. A sortie from the city was repelled but weakened the besieging British, and on 29 June a British ship flying under a truce flag brought news of a preliminary peace agreement between the two nations, resulting in a mutually-agreed suspension of hostilities on 2 July.