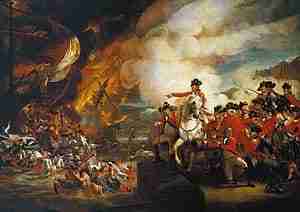 The Great Siege of Gibraltar was an unsuccessful attempt by Spain and France to capture Gibraltar from the British during the American War of Independence. This was the largest action fought during the war in terms of numbers, particularly the Grand Assault of 18 September 1782. At three years and seven months, it is the longest siege endured by the British Armed Forces.

In 1738 a dispute between Spain and Great Britain arose over commerce between Europe and the Americas. Initially, both sides intended to sign an agreement at the Spanish Royal Palace of El Pardo, but in January of the following year, the British Parliament rejected the advice of Foreign Minister Robert Walpole, a supporter of the agreement with Spain. A short time later, the War of Jenkins’ Ear began, and both countries declared war on 23 October 1739, each side drawing up plans to establish trenches near Gibraltar. Seeing these first movements, Britain ordered Admiral Vernon to sail from Portobello and strengthen the squadron of Admiral Haddock who was already stationed in the Bay of Gibraltar.

The passage of years failed to break the hostilities in the region. Then on 9 July 1746, King Philip V of Spain died in Madrid. His successor, Ferdinand VI, soon began negotiations with Britain on trade. The British Parliament was amenable to such negotiations, and even looked favourably upon lifting the British embargo on Spain and possibly ceding Gibraltar. The neutrality adopted by Ferdinand VI quickly ended with his death in 1759. The new king, Charles III, was less willing to negotiate with Great Britain. Instead, he signed a Family Compact with Louis XV of France on 15 August 1761. At that time France was at war with Britain, so Britain responded by declaring war on Spain and capturing the Spanish colonial capitals of Manila and Havana. Two years later, after cessation of hostilities, Spain recovered Manila and Havana in exchange for Spanish holdings in Florida as part of the 1763 Treaty of Paris.

In the years of peace that followed both France and Spain hoped for an opportunity to launch a war against Britain on more favourable terms and recover their lost colonial possessions. Following the outbreak of the American War of Independence, both states supplied funding and arms to the American rebels, and drew up a strategy to intervene on the American side and defeat Britain.{Sfn | Harvey | 2001 | p = 362}

On 12 April 1779, France and Spain signed the Treaty of Aranjuez wherein they agreed to aid one another in recovering lost territory from Britain. Then, in June 1779, Spain declared war on Great Britain, France having done so the year before. France and Spain sought to secure Gibraltar, which was a key link in Britain’s control of the Mediterranean Sea, and expected its capture to be relatively quick—a precursor to a Franco-Spanish invasion of Great Britain.

The Spanish blockade was directed by Martín Álvarez de Sotomayor. Spanish ground forces were composed of two battalions of Royal Guards, another two of Walloon Guards, with artillery and cavalry, about 13,000 in all. The artillery was commanded by Rudesindo Tilly, while the cavalry and the French dragoons were headed by the Marquis of Arellano. Antonio Barceló commanded the maritime forces responsible for blockading the bay, and established his base in Algeciras, commanding a fleet of several xebecs and gunboats.{Sfn | Montero | 1860 | p = 338} A fleet of eleven ships and two frigates were placed in the Gulf of Cadiz under the command of Luis de Córdova y Córdova to block the passage of British reinforcements.

When the Rock was first besieged, the British garrison consisted of 5,382 troops; General Eliott was the Governor-General, and his determined handling of the defence inspired all the troops under him with the greatest confidence. All the defences were strengthened, and many of the infantry, including picked men, assisted the artillery in serving the guns. The garrison included contingents of Hanoverian and Corsican troops.

The British had anticipated an attack for some time, and a number of ships had sailed to reinforce and supply Gibraltar.{Sfn | Sugden | 2004 | p = 109-10} They stepped up their preparations after France entered the conflict in 1778, although the French were initially more concerned with sending forces to America, and it was not until Spain joined the war that the long-expected siege commenced.{Sfn | Harvey | 2001 | pp = 385–87}

The combined Spanish and French fleets blockaded Gibraltar from the sea, while on the land side an enormous army constructed forts, redoubts, entrenchments, and batteries from which to attack. General Eliott formed a corps of sharpshooters.

As the winter of 1779 came down the garrison began to suffer from want of fresh provisions, which became very scarce and dear. Bread was almost impossible to get, and was not permitted to be issued except to the sick and children. Salt meat and biscuits, and not much of that, soon became the food of the troops, with an occasional issue of four ounces of rice as a full day’s ration. Fuel was exhausted, and fires were only made with difficulty, the salt-encrusted timbers of old ships broken up in the harbour for the purpose. To the rigours of the siege was added a violent outbreak of scurvy among the troops, due to the want of fresh vegetables and medicines. As the winter wore on, the scanty store of food grew so alarmingly low that the already meagre ration was reduced to just enough to keep life in the bodies of the men. But their morale remained high and the troops continued to take their turns at trench or battery, and endured the inclement weather and the shortage of food with fortitude.

The Spanish were forced to commit increasing number of troops and ships to the siege, postponing the planned Invasion of England, due to this and the cancellation of the Armada of 1779.

Admiral George Rodney, after capturing a Spanish convoy off Cape Finisterre on 8 January 1780, and eight days later defeating a Spanish fleet at the Battle of Cape St. Vincent, reached Gibraltar in the spring of 1780, bringing reinforcements of 1,052 men and an abundance of supplies. This greatly heartened the garrison, who, as soon as Rodney’s fleet left, found the fortress as closely besieged as ever.

The British defenders resisted every attempt to capture Gibraltar by assault. While the two sides unceasingly exchanged shot and shell, by the end of the summer provisions again began to be meagre and scurvy began to reappear, reducing the effective strength of the garrison.Through the use of small, fast-sailing ships that ran the blockade they were able to keep in touch with the British forces on Minorca until 1782, when that island fell.

Throughout the second winter the garrison faced foes, elements, disease, and starvation, until in April 1781 another British fleet succeeded in reaching the harbour with stores and food.

On 12 April 1781 Vice Admiral George Darby’s squadron of 29 ships of the line escorting 100 store ships from England laden for Gibraltar entered the bay. The Spanish fleet was unable to intercept Darby’s relief. The Spanish, frustrated by this failure, opened up a terrific barrage while the stores were unloaded, but only did great damage to the town. The civilian population of Gibraltar sailed with Darby for England on 21 April, again without hindrance from the blockading Spanish and French fleet.{Citation needed |date=June 2013}

The French and Spanish found it was impossible to starve the garrison out. They therefore resolved to make further attacks by land and sea and assembled a large army and fleet to carry this out. But on 27 November 1781, the night before they were to launch the grand attack, half the British garrison filed silently out of their defence works and made a surprise sortie.

The sortie routed the whole body of the besieging infantry in the trenches, set their batteries on fire, blew up and spiked their cannon, destroyed their entrenchments, and killed or took prisoner a large number of the Spaniards. The British did damage to the extent of two million pounds to the besiegers’ stores and equipment that night. Spanish losses were over 200 and Governor Eliott claimed many were ‘killed on the spot’ because of the surprise. As the Spanish recovered and prepared to launch a counter-attack, the British withdrew back inside their fortifications.

This reverse postponed the grand assault on Gibraltar for some time. Still, the Spaniards closely maintained the siege.

A new depressing gun-carriage was devised by George Koehler which allowed guns to be fired down a slope. This was demonstrated on 15 February 1782 at Princess Royal’s Battery. This new carriage enabled the defending guns to take advantage of the height of the Rock of Gibraltar.

On 10 October a Spanish ship of the line San Miguel of seventy two guns under the command of Don Juan Moreno was captured by the garrison after it had lost its mizzen mast in a storm. Cannon fire from the King’s Bastion was fired at the vessel some of which penetrated causing damage and casualties. The San Miguel then trying with great difficulty to get out of danger was grounded. Gunboats from the garrison quickly captured her being too close to the guns of Gibraltar. Moreno agreed to surrender to avoid any further bloodshed, and a total of 634 Spanish sailors, marines and dismounted dragoons were captured.{Sfn | Drinkwater | 1862 | p = 147} An attempt on 17 December to bombard the San Miguel by the Spanish and French with mortars failed causing only minimal damage. By this time the powder magazine had been removed or thrown overboard.{Sfn | Drinkwater | 1862 | p = 157}

In Britain the Admiralty considered plans for a major relief of Gibraltar, opting to send a larger, but slower fleet, rather than a smaller faster one.{Sfn | Syrett | 2006 | p = 103} In September 1782 a large fleet left Spithead under Richard Howe, arriving off Cape St Vincent on 9 October. The following evening a gale blew up, scattering the Spanish and French fleet. This allowed Howe to sail unopposed into Gibraltar. A total of 34 ships of the line escorted 31 transport ships which delivered supplies, food, and ammunition. The fleet also brought the 25th, 59th, and 97th regiments of foot bringing the total number of the garrison to over 7,000.{Sfn | Syrett | 2006 | pp = 104-5}{Sfn | Chartrand | Courcelle | 2006 | p = 23} Howe then sailed out and fought an indecisive battle with the combined allied fleet before withdrawing to Britain in line with his orders.

The siege was continued for some months longer, but in the spring of 1783 a preliminary peace agreement brought the cessation of hostilities. Finally, in February 1783 the siege was lifted. The French and Spanish troops retired disheartened and defeated, after three years and seven months’ conflict.

Although the Spanish attempted to regain Gibraltar at the negotiating table, they preferred to retain Minorca and territories in the West Indies, and the final peace treaty left Gibraltar with the British.{Sfn | Chartrand | Courcelle | 2006 | p = 88} The victorious British garrison sustained a loss of 1,231 men, and expended 8,000 barrels of gunpowder.

George Augustus Eliott was made a Knight of the Bath and was created 1st Baron Heathfield of Gibraltar. The Treaties of Versailles reaffirmed previous treaties. Many British regiments engaged in the defence were given the badge of the Castle of Gibraltar with the motto ‘Montis Insignia Calpe’, in commemoration of the gallant part it took in the ‘Great Siege’.