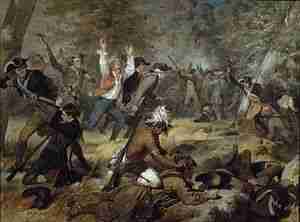 The Battle of Wyoming (also known as the Wyoming Massacre) was an encounter during the American Revolutionary War between American Patriots and Loyalists accompanied by Iroquois raiders that took place in the Wyoming Valley of Pennsylvania on July 3, 1778. More than three hundred Patriots were killed in the battle.

After the battle, settlers claimed that the Iroquois raiders had hunted and killed fleeing Patriots before using ritual torture against thirty to forty who had surrendered, until they died.[3]

In 1777, the British General John Burgoyne led a campaign to gain control of the Hudson River in the American Revolutionary War. Burgoyne was weakened by loss of time and forces after the Battle of Oriskany and forced to surrender after the Battles of Saratoga in October. News of his surrender prompted France to enter the war as an American ally. Concerned that the French might attempt to retake parts of New France that had been lost in the French and Indian War (something they did not know the Franco-American Treaty of Alliance specifically forbade), the British adopted a defensive stance in Quebec. They recruited Loyalists and allied Indians to engage in a frontier war along the northern and western borders of the Thirteen Colonies.[4]

Colonel John Butler recruited a regiment of Loyalists for the effort, while Seneca chiefs Sayenqueraghta and Cornplanter recruited primarily Seneca warriors, and Joseph Brant recruited primarily Mohawk men for what essentially became a guerrilla war against frontier settlers. By April 1778 the Seneca were raiding settlements along the Allegheny and Susquehanna Rivers, and by early June these three groups met at the Indian village of Tioga, New York. Butler and the Seneca decided to attack the Wyoming Valley while Brant and the Mohawks (who had already raided Cobleskill in May) went after communities further north.[5]

American military leaders, including Washington and Lafayette, also sought to recruit Iroquois, primarily as a diversion to keep the British in Quebec busy. Their recruitment attempts met with more limited success. The Oneida and Tuscarora were the only two of the Six Nations to become Patriot allies.

The British forces arrived in the valley on June 30, having alerted the settlers to their approach by killing three men working at an unprotected gristmill on June 28. The next day Colonel Butler sent a surrender summons to the militia at Wintermute’s (Wintermoot) fort. Terms were arranged that the defenders, after surrendering the fort with all their arms and stores, would be released on the condition that they would not again bear arms during the war. On July 3, the British saw that the defenders were gathering in great numbers outside of Forty Fort. William Caldwell was destroying Jenkin’s fort, and when the Americans were still a mile away, Butler set up an ambush and directed that Fort Wintermute be set on fire. The Americans, thinking this was a retreat, advanced rapidly. Butler instructed the Seneca to lie flat on the ground to avoid being seen. The Americans advanced to within one hundred yards of the rangers and fired three times. The Seneca came out of their positions, fired a volley, and attacked the Americans in close combat.

Accounts indicate that the moment of contact was followed by a sharp battle lasting about 45 minutes. An order to reposition the Patriot line turned into a frantic rout when the inexperienced Patriot militia panicked. This ended the battle and triggered the Iroquois hunt for survivors. Only sixty of the Americans managed to escape, and only five were taken prisoner. Some of the victorious Loyalists and Iroquois killed and tortured an unknown number of prisoners and fleeing soldiers. Butler reported that 227 American scalps were taken.[6]
Colonel Dennison surrendered Forty Fort and two other forts along with the remaining soldiers the next morning. The Americans were paroled on the condition that they refrain from hostilities for the remainder of the war. These soldiers were not harmed. Colonel Dennison and the militia did not honor the terms of their parole, and they were under arms within the year, participating in later attacks on Iroquois villages.

Most non-combatants were spared and almost no inhabitants were injured or molested after the surrender of the forts.[7] Colonel Butler wrote: “But what gives me the sincerest satisfaction is that I can, with great truth, assure you that in the destruction of the settlement not a single person was hurt except such as were in arms, to these, in truth, the Indians gave no quarter.”[8] An American farmer wrote: “Happily these fierce people, satisfied with the death of those who had opposed them in arms, treated the defenseless ones, the woman and children, with a degree of humanity almost hitherto unparalleled”.[9]

Out of 1,000 men available, John Butler reported only two Loyalist Rangers and one Indian killed, and eight Indians wounded. He claimed that his force took 227 scalps, burned 1,000 houses, and drove off 1,000 cattle plus many sheep and hogs. Of the 60 Continentals and 300 militiamen involved, only about 60 escaped the disaster.[11] The Iroquois were enraged at the accusations of atrocities which they said they had not committed, as well as at the militia taking arms after being paroled. Later that year, they retaliated in the Cherry Valley massacre.[12]

Reports of the massacres of prisoners and atrocities at Wyoming infuriated the American public. Afterward, Colonel Thomas Hartley arrived with Hartley’s Additional Continental Regiment to defend the valley to try to harvest the crops.[13][14] They were joined by a few militia companies, including that of Captain Dennison, who violated his parole to join the force. In September, Hartley and Dennison ascended the east branch of the Susquehanna with 130 soldiers, destroying Indian villages as far as Tioga and recovering a large amount of plunder taken during the raid. They skirmished with the hostile Indians and withdrew when they learned that Joseph Brant was assembling a large force at Unadilla.[15]

In summer 1779, the Sullivan Expedition commissioned by General George Washington, methodically destroyed 40 Iroquois villages, and an enormous quantity of stored corn and vegetables throughout upstate New York. The Iroquois never recovered from the damage inflicted by Sullivan’s soldiers, and many died of starvation that winter. The tribes allied with the British continued to raid Patriot settlements until the end of the war.[16]

The massacre was depicted by the Scottish poet Thomas Campbell in his 1809 poem “Gertrude of Wyoming”. Because of the atrocities involved, Campbell described Joseph Brant as a “monster” in the poem, although it was later determined that Brant was not present.[17] Brant was at Oquaga on the day of the attack.

The western state of Wyoming received its name from the U.S. Congress when it became Wyoming Territory in 1868, much to the puzzlement of its residents.

The annual program has continued each year since then on the grounds. One hundred and seventy-eight names of Patriots killed in the battle are listed on the Wyoming Monument, as well as the names of about a dozen militia who were killed or died in captivity a day or so prior to the main battle. A possible explanation for the difference between the number of names on the monument (178) and the reported number of scalps taken in the battle (227) is that allegedly numerous civilians (perhaps as many as 200)—instead of surrendering to Colonel Butler—elected to flee and died of exposure in a swamp known as the “Shades of Death” after the battle.[18]