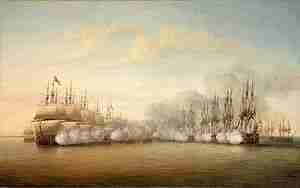 The Battle of Negapatam was the third in the series of battles fought between a British fleet under Vice-Admiral Sir Edward Hughes and a French fleet under the Bailli de Suffren off the coast of India during the American Revolutionary War. The battle was fought on 6 July 1782.

France had entered the American Revolutionary War in 1778, and Britain declared war on the Dutch Republic in late 1780 after the Dutch refused to stop trading in military supplies with the French and the Americans. The British had rapidly gained control over most French and Dutch outposts in India when news of these events reached India, spawning the Second Anglo-Mysore War in the process.

The French admiral the Bailli de Suffren was dispatched on a mission to provide military assistance to French colonies in India. He arrived in February 1782, and immediately engaged the British fleet of Vice-Admiral Sir Edward Hughes in the inconclusive Battle of Sadras. After both fleets spent time in port repairing, refitting, and revictualing, they met again in the April Battle of Providien, south of the Ceylonese port of Trincomalee that was ended by a storm and then nightfall. Hughes put into Trincomalee, a formerly Dutch port the British had captured in January, for repairs, while Suffren went to the Dutch-controlled port of Batticaloa.

While at Batticaloa, Suffren received dispatches from the Île de France ordering him to return there to escort additional French troops to India. He chose not to do so, citing the parity between the two fleets, and the need to defend French troops already on the ground in India against the movements of the British fleet.

The French ground troops, about 2,000 effective troops under the command of Comte du Chemin, had captured Cuddalore on 6 May. Hyder Ali, the ruler of Mysore, originally wanted the French to take the more important port of Negapatam. The French joined with Hyder’s army of 60,000 to lay siege to the British at Vandavasi. When the British sent an army of 12,000 toward Vandivasa to relieve the siege, du Chemin, again against the wishes of Hyder, refused to engage in a battle that the French-Mysorean force would probably have won, significantly reducing the British military presence in India. Instead, Hyder lifted the siege and retreated to the vicinity of Pondicherry.

There he learned of Suffren’s actions in the first two battles with Hughes, and sent a message to Suffren to arrange a meeting. Suffren had in the meantime sailed from Batticaloa to do the job that du Chemin would not: capture Negapatam. He stopped at Cuddalore on 20 June to take on troops and supplies for the attack, which he hoped to do by surprise. When he was ready to sail he learned that Hughes had sailed past, apparently also en route to Negapatam. As his fleet had grown by captured prizes and arrivals from Île de France (it was now twelve ships of the line and four frigates), Suffren gave chase and caught up with Hughes, who had anchored off Negapatam, on 5 July.

Suffren was in the process of forming his battle line around 3 pm when a squall took down the main and mizzen top masts of Ajax, forcing her to drop out of his line. When the squall calmed down the breeze was to Hughes’ advantage so he sailed out of the harbour. The two fleets spent the night anchored two cannonshots apart.

The next morning Suffren was infuriated to learn that repairs had not been made to Ajax, and that her captain wanted to retreat for repairs. Given that battle was imminent, Suffren refused. He then ordered his line to bear down on the British line for close action. As they began to move, Ajax stood away and did not join the action. At 9:30 on 6 July, the fleets closed and opened fire on each other, first at long range. Flamand engaged Hero and Exeter, Annibal engaged Isis, Sévère faced Barford, and Brilliant opposed Sultan while the two flagships, Héros and Superb, did battle with each other. The remainder of the British line was not able to directly line up against the French, resulting in an angle in their line where Sphinx and Monarca battled that minimized the action between the ships at the end of the line. Flamand took significant damage, but was able to return the favor to its opponents. Brillant began to suffer under the fire of Sultan, but Suffren managed to detach Héros to come to her rescue.

The battle proceeded with vigour until about 1 pm, when the wind suddenly changed, throwing both lines into confusion. With occasional meetings between two ships, Hughes attempted to reform his line around 2, but neither fleet was in a state to adopt battle positions easily, so Suffren decided to draw away toward Cuddalore. One British observer noted that “our fleet was utterly incapable or preventing or pursuing them”.

Following the battle, Suffren stripped M. Bouvet, the captain of Ajax, of his command, and arrested three others for a variety of transgressions in this battle and the previous two. One of those arrested, M. de Cillart, commander of Sévère, had started to strike his colours during one of the post-squall engagements, but his subordinates prevented the act. Suffren then sailed for Cuddalore to effect repairs. Hughes spent the next two weeks at sea, only returning to Madras for repairs on 20 July. Negapatam would remain in British hands till the end of the war. At the Treaty of Paris (1783) the Dutch Republic would cede Negapatam to Britain.