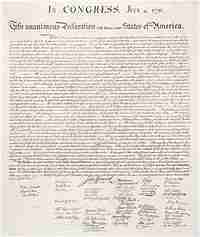 After Congress approved the final wording of the Declaration on July 4, a handwritten copy was sent a few blocks away to the printing shop of John Dunlap. Through the night Dunlap printed about 200 broadsides for distribution. Before long, the Declaration was read to audiences and reprinted in newspapers across the thirteen states. The first official public reading of the document was by John Nixon in the yard of Independence Hall on July 8; public readings also took place on that day in Trenton, New Jersey, and Easton, Pennsylvania. A German translation of the Declaration was published in Philadelphia by July 9.