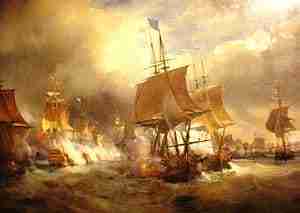 The Battle of Ushant (also called the First Battle of Ushant) took place on 27 July 1778, fought between French and British fleets {convert|100|mi|km} west of Ushant, a French island at the mouth of the English Channel off the north-westernmost point of France. The battle ended indecisively and led to political disputes in both countries.

The British had 29 ships-of-the-line commanded by admiral Augustus Keppel, in HMS Victory, sailing from Spithead on 9 July 1778. The French fleet had 32 ships commanded by admiral the Comte d’Orvilliers, sailing from Brest on 8 July 1778. Keppel sighted the French fleet west of Ushant on 23 July. D’Orvilliers, who had orders to avoid battle, was cut off from Brest but retained the weather gage. Two of his ships, standing to windward, escaped into port, leaving him with 27.{cn|date=May 2013}

The two fleets manoeuvred during shifting winds and a heavy rain squall until a battle became inevitable with the British more or less in column and the French in some confusion. However, the French managed to pass along the British line to windward with their most advanced ships. At around noon, {HMS |Victory||6} opened fire on Bretagne, 110 guns, followed by Ville de Paris, 90 guns. The British van escaped with little loss but Sir Hugh Palliser’s rear division suffered considerably. Keppel made the signal to wear and follow the French, but Palliser did not conform and the action was not resumed.{cn|date=May 2013}

Chartres requested permission to carry news of the battle to Paris and Versailles. He arrived there early on the morning of 2 August 1778, had Louis XVI woken up and announced a victory. Chartres was widely celebrated and received a twenty minute standing ovation when he attended the opera. An effigy of Admiral Keppel was burnt in the gardens of the Palais Royal.{Sfn | Ambrose | 2008 | p = 76} Chartres then returned to Brest to rejoin the fleet. Fresh reports of the battle and Chartres’ role then began to arrive in the French capital. Far from a victory, it was now reported as being at best indecisive, and Chartres was accused by d’Orvilliers of either misunderstanding or deliberately ignoring an order to engage the enemy.{Sfn | Ambrose | 2008 | pp = 76–77}

Chartres was soon mocked by street ballads in Paris, and the embarrassment led to Chartres eventually resigning from the Navy. He subsequently tried to gain permission to take part in a planned invasion of Britain the following year but he was refused by the King.{Sfn | Ambrose | 2008 | p = 79}

A violent quarrel, exacerbated by political differences, broke out between the British commands. This led to two courts-martial, the resignation of Keppel, and great injury to the discipline of the navy. Keppel was court-martialled but cleared of dereliction of duty charges. Palliser was criticized by an inquiry, before the affair turned into a squabble of party politics.{cn|date=May 2013}