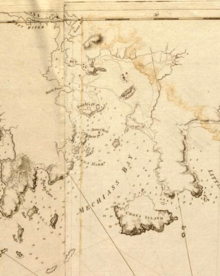 The outcome of the raid was disputed. Collier claimed that the action was successful in destroying military stores for an attack on Fort Cumberland (although such stores had not been delivered to Machias), while the defenders claimed that they had successfully prevented the capture of Machias and driven off the British.

The small community of Machias, located in the eastern district of Massachusetts that is now the state of Maine, was a persistent thorn in the side of British naval authorities since the start of the American Revolutionary War. In June 1775 its citizens rose up and seized a small naval vessel, and the community had ever since been a base for privateering.

In 1777 John Allan, an expatriate Nova Scotian, was authorized by the Second Continental Congress to organize an expedition to establish a Patriot presence in the western part of Nova Scotia (present-day New Brunswick). Although Congress authorized him to recruit as many as 3,000 men, the Massachusetts government was only prepared to give him a colonel’s commission and authority to raise a regiment in eastern Massachusetts to establish a presence in the St. John River valley. Allan based his effort in Machias, and had by June landed some 40 men in the area. However, British authorities in Halifax had received some intelligence of Allan’s intended mission, and a larger British force arrived at the St. John River on June 23. Men Allan had left at the settlements near the mouth of the river skirmished with the British but then withdrew upriver. Allan was forced to make a difficult overland journey back to Machias after his small force retreated up the river. He was joined on this journey by a number of sympathetic Maliseet Indians that he had persuaded to join the American cause. In early August the Massachusetts Provisional Congress voted to disband forces recruited for Allan’s expedition, because of the imminent threat posed by the army of General John Burgoyne in upstate New York.

Papers documenting Allan’s fairly elaborate plans, including a projected attack on Fort Cumberland, were taken during the action on the St. John River, and fell into the hands of Captain Sir George Collier, second in command to Admiral Mariot Arbuthnot in the naval station at Halifax. This spurred Collier to act, since there had already been one attempt on Fort Cumberland the previous year. He therefore organized an assault on Machias, Allan’s base of operations and the source of many of his recruits. Because Collier and the commander of land forces at Halifax, General Eyre Massey, did not get along, Collier decided to launch the expedition without taking on any British Army troops. He sailed from Halifax in late July in the frigate {HMS|Rainbow|1747|6}, accompanied by the brig {HMS|Blonde|1760|6}, planning to use the marines aboard those ships in ground operations. He was joined by the frigate {HMS|Mermaid|1761|6} and the sloop {HMS|Hope|1764|6} while making the passage to Machias.

The defense of Machias consisted of local militia under the command of Colonel Jonathan Eddy, the leader of the 1776 attack on Fort Cumberland. He had been warned that the British were organizing an attack. The militia laid a log boom across the Machias River, and constructed several earthen redoubts further upriver, armed with cannons taken from local privateers. The defense was coincidentally reinforced by 40 to 50 Maliseet, Passamaquoddy, and Penobscots that Colonel Allan had called to Machias to explain what had gone wrong with his expedition.

After leaving Halifax, Nova Scotia, Collier’s fleet arrived at the mouth of the river early on August 13. He boarded 123 marines onto the Hope, and ordered her and the Blonde up the river. Word of this reached the militia, and 35 men mustered to oppose them. The ships reached the log boom, and a firefight began between the two forces. The militia resistance was sufficient to keep the British from attempting a landing that day. Early the next morning, under the cover of fog, the marines were landed. They cut the log boom, seized a sloop carrying lumber, and set fire to a storehouse, seizing stores of flour, rice, corn, shoes, and ammunition before returning to the ships.

The two ships then moved further up the river until they reached the town itself. All along the way they were harassed by musket and cannon fire from the shore, as the militia and their Indian allies positioned themselves to dispute possible landing sites. When darkness set in the Indians reportedly began chanting and shouting in an attempt to magnify their numbers. At this point, “To the great Surprise and Astonishment of every one[,] in Less than half an Hour after Coming to an Anchor, the Brig & Sloop Both Gote under way without firing a Gun” and “made down the River against the Tide of flood.” The Hope, however, ran aground while making its way downstream in the twilight. The militia hauled a swivel gun to a nearby shore, and peppered her with shot the next morning before she was refloated by the tide and made her way into Machias Bay.

Colonel Allan ascribed the militia’s success to British concerns that they might be entering a trap. He also grandiosely likened the encounter to another battle, writing “not an Action during the War Except Bunker Hill there was such a slaughter”. American estimates of British casualties ran from 40 to 100, while claiming their own casualties at one killed and one wounded. The British reported their losses as three killed and 18 wounded, which were mainly incurred when the Hope grounded.

After departing from Machias, Collier cruised the Maine coast, capturing smaller American ships, and raided communities on the Sheepscot River. There he captured a frigate laden with mast timbers destined for France. In his report Collier declared the mission a success, and claimed to have successfully forestalled another invasion of Nova Scotia. He also believed that with another 100 men “the destruction [of Machias] would have been compleat”. General Massey, whose troops had been preparing to participate in the expedition but were excluded by Collier’s abrupt departure from Halifax, wrote that Collier “wanted the whole honour of destroying Machias”, and that he “stole out of Halifax, made a futile attack on Machias, was most shamefully drove from thence …”

Machias was not attacked again during the war, although it became somewhat isolated when the British occupied Castine in 1779, establishing the colony New Ireland. Collier returned to successfully defend New Ireland from the American patriot Penobscot Expedition. (Machias and other parts of eastern Maine were successfully occupied by British forces during the War of 1812, again the British created the colony New Ireland, but were returned to United States control after the war.)