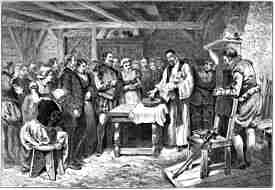 Virginia Dare (born August 1587, date of death unknown) was the first child born in the Americas to English parents, Eleanor  (also Ellinor or Elyonor) and Ananias Dare.[1] She was born into the short-lived Roanoke Colony in what is now North Carolina, US. What became of Virginia and the other colonists remains a mystery. The fact of her birth is known because the governor of the settlement, Virginia Dare’s grandfather, John White, returned to England in 1587 to seek fresh supplies. When White eventually returned three years later, Virginia and the other colonists were gone.

During the past four hundred years, Virginia Dare has become a prominent figure in American myth and folklore, symbolizing different things to different groups of people. She has been featured as a main character in books, poems, songs, comic books, television programs and films. Her name has been used to sell different types of goods, from vanilla  products to wine and spirits. Many places in North Carolina and elsewhere in the Southern United States have been named in her honor.

Virginia Dare was born in the Roanoke Colony in what is now North Carolina in August 1587, the first child of English parents born in the New World. “Elenora, daughter to the governor of the city and wife to Ananias Dare, one of the assistants, was delivered of a daughter in Roanoke”.[2] The child was healthy and “was baptised there the Sunday following, and because this child was the first Christian born in Virginia, she was named Virginia”.[2]

Little is known of the lives of either of her parents. Her mother Eleanor  was born in London around 1563, and was the daughter of John White, the governor of the ill-fated Roanoke Colony. Eleanor married Ananias Dare (born c. 1560), a London tiler andbricklayer,[3] at St Bride’s Church[4] in Fleet Street in the City of London.[5] He too was part of the Roanoke expedition. Virginia Dare was one of two infants born to the colonists in 1587 and the only female child born to the settlers.

Little else is known of Virginia Dare’s presumably short life, as the Roanoke Colony did not endure. At the end of 1587, having established his colony, Virginia’s grandfather John White sailed for England for fresh supplies. Due to England’s war with Spain, and the pressing need for ships to defend against the Spanish Armada , he was unable to return to Roanoke until August 18, 1590, Virginia Dare’s third birthday, by which time he found the settlement had been long deserted. The buildings had collapsed and “the houses [were] taken downe”.[6] Worse, White was unable to find any trace of his daughter or granddaughter, or indeed any of the 80 men, 17 women, and 11 children who made up the “Lost Colony”.[6]

Mystery of the “Lost Colony”

There are a number of theories regarding the fate of the colonists, the most widely accepted one being that they sought shelter with local Indian tribes, and either intermarried with the natives or were killed. In 1607, John Smith  and other members of the successful Jamestown Colony sought information about the fate of the Roanoke colonists. One report indicated that the survivors had taken refuge with friendlyChesapeake Indians, but Chief Powhatan claimed his tribe had attacked the group and killed most of the colonists. Powhatan showed Smith certain artifacts he said had belonged to the colonists, including a musket barrel and a brass mortar and pestle. However, no archaeological evidence exists to support this claim. The Jamestown Colony received reports of some survivors of the Lost Colony and sent out search parties, but none was successful. Eventually they determined they were all dead.[7]Little is known for certain of the fate of Virginia Dare or her fellow colonists. Governor White found no sign of a struggle or battle. The only clue to the colonists’ fate was the word “Croatoan” carved into a post of the fort, and the letters “Cro” carved into a nearby tree. All the houses and fortifications had been dismantled, suggesting that their departure had not been hurried. Before he had left the colony, White had instructed them that if anything happened to them, they should carve a Maltese cross on a tree nearby, indicating that their disappearance had been forced. As there was no cross, White took this to mean they had moved to Croatoan Island (now known asHatteras Island), but he was unable to conduct a search.

In her 2000 book Roanoke: Solving the Mystery of the Lost Colony, historian Lee Miller surmised that some of the Lost Colony survivors sought shelter with a neighboring Indian tribe, the Chowanoc , that was attacked by another tribe, identified by the Jamestown Colony as the “Mandoag”, who may have been either Tuscarora or Eno, also known as the Wainoke. William Strachey, a secretary of the Jamestown Colony, wrote in The History of Travel into Virginia Britannia in 1612 that, at the Indian settlements of Peccarecanick and Ochanahoen, there were reportedly two-story houses with stone walls. The Indians supposedly learned how to build them from the Roanoke settlers.[8] There were also reported sightings of European captives at various Indian settlements during the same time period.[9] Strachey also wrote that four English men, two boys, and one maid had been sighted at the Eno settlement of Ritanoc, under the protection of a chief called Eyanoco. The captives were forced to beat copper. The captives, he reported, had escaped the attack on the other colonists and fled up the Chaonoke river, the present-day Chowan River in Bertie County, North Carolina.[8][10][11]

Some people also see her as a symbol of women’s rights. In the 1980s feminists  in North Carolina called for state residents to approve the Equal Rights Amendment and “Honor Virginia Dare.”[12]
For some residents of North Carolina, she has been an important symbol of the state and the desire to keep it predominantly European-American. In the 1920s, a group that opposedsuffrage  for women feared that black women would get the vote. One group in Raleigh, North Carolina, urged “that North Carolina remain white … in the name of Virginia Dare.”[12]Today Virginia Dare’s name is used for the anti-illegal immigration group The VDARE Project.In the more than four hundred years since her birth, Virginia Dare has become a prominent figure in American myth and folklore, representing different things to different people. A 2000 article in the Piedmont Triad, North Carolina, News and Record noted that, for many Americans, particularly Southerners, she symbolizes innocence and purity, “new beginnings, promise, and hope” as well as “adventure and bravery” in a new land. She also symbolizes mystery because of her mysterious fate.[12]

There is a memorial to Virginia Dare in St Bride’s Church, Fleet St, where her parents were married prior to their journey to Roanoke.[4] The bronze sculpture, created by Clare Waterhouse in 1999, replaces a marble sculpture of Dare carved by Marjorie Meggit in 1957. The original has been missing since 1999.[13]

Professor Haywood Pearce, Jr., of Brenau College (now Brenau University ) in Gainesville, Georgia, interviewed every person who found a stone and concluded that the stones were not a hoax as they were found in different places, at different times, by different people, none of whom had any knowledge of Elizabethan English. His views won over some well-known historians, according to contemporary press accounts.From 1937 until 1941, the so-called “Dare Stones” were in the news. The 48 carved stones, all with writing in Elizabethan English, were allegedly found in northern Georgia and the Carolinas. The first bore an announcement of the death of Virginia Dare and her father, Ananias Dare, at the hands of “savages” in 1591. Later stones, brought in by various people, told a complicated tale of the fate of the Lost Colony. Later stones, each addressed to John White and signed with the name of Virginia’s mother, Eleanor, called for revenge against the “savages” or gave her father the direction taken by the survivors. A stone dated 1592 indicated the survivors had reached a sanctuary in the Nacoochee Valley area and lived there in “primeval splendor.” Another stone, dated 1598, indicated that Eleanor had married the “king” of the tribe, while another said she had borne the chief a daughter, the tribe was angry, and asked for White to send the infant girl to England. A stone dated 1599 announced Eleanor Dare’s death and said she had left behind a daughter named Agnes.

On April 26, 1941, an article was published in The Saturday Evening Post [14] by journalist Boyden Sparks, attacking the authenticity of the stones, pointing to improbabilities in their story and producing evidence that those who had claimed to discover them were in fact hoaxers.[15] Pearce and the other scholars were not implicated in the alleged fraud, and no legal action was ever taken, but all of them renounced belief in the authenticity of the stones. Sparks theorized that the fakery was inspired by the 1937 publicity in North Carolina surrounding the 350th anniversary of the Lost Colony.

Today, Brenau keeps the Dare Stones as a sort of 20th-century media curiosity, but generally does not display them or publicize their existence. The stones still have a few supporters, most notably Robert W. White, whose book A Witness For Eleanor Dare insists they were genuine and that criticism of them was false.[15]

In 1937 the United States Mint issued a half-dollar commemorative coin that depicted Virginia Dare as the first English child born in the New World. This was also the first time a child was depicted on United States currency.[16] [17]

One of the first was Cornelia Tuthill’s 1840 novel Virginia Dare, or the Colony of Roanoke, in which Virginia marries a Jamestown settler. Virginia Dare met the Indian princess Pocahontas  in E.A.B. Shackleford’s 1892 novel Virginia Dare: A Romance of the Sixteenth Century. Virginia Dare was the main character in Sallie Southall Cotten’s 1901 book in verse The White Doe: The Fate of Virginia Dare. In the book, she is turned into a white doe by an Indian witch doctor after she rejects his advances. When her true love, an Indian warrior, shoots her with a silver arrow, she turns back into a woman just before she dies in his arms. Cotten has asserted, however, that the tale of Dare as the White Doe had survived for some three centuries as part of colonial folklore.[18] In the 1908 novel The Daughter of Virginia Dare, author Mary Virginia Wall madePocahontas the daughter of Virginia Dare. In Herbert Bouldin Hawes’ 1930 novel The Daughter of the Blood, Virginia Dare is involved in a romantic triangle with John Smith and Pocahontas.Virginia Dare quickly entered into folklore as the “first white child” born in British America. The fate of Virginia Dare and the Lost Colony has been the subject of many literary, film, and television adaptations, all of which have added to her myth:

Virginia Dare’s name has also been used to sell a number of products. Virginia Dare was the name of the first commercial wine to sell after the repeal of Prohibition  in 1933.[19] The Virginia Dare Extract Company, a maker of vanilla products, sells its products with a symbol of Virginia as a fresh-faced, blonde woman wearing a white ruffled mob cap. The company’s Web site notes that Virginia Dare symbolizes “wholesomeness and purity.”[20] In Rancho Cucamonga, California, a now-defunct winery on the corner of Haven Avenue and Foothill Boulevard (U.S. Route 66) is called Virginia Dare.Virginia Dare’s name has become a tourist attraction for North Carolina. Many locations are named after Virginia Dare, including Dare County, North Carolina; the Virginia Dare Trail, a section of NC 12; Virginia Dare Memorial Bridge, the second, newest, and widest bridge spanning the Croatan Sound connecting Roanoke Island to Manns Harbor. It carries US 64. Residents of Roanoke Island celebrate Virginia Dare’s birthday each year with an Elizabethan Renaissance fair. A statue of Virginia as a grown woman, naked and wrapped in a buffalo skin, is on display in the Elizabethan Gardens on the island.[12] At Smith Mountain Lake there is an active tour boat named Virginia Dare.