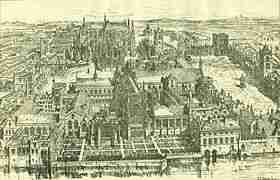 The Massachusetts Government Act (14 Geo. 3 c. 45) was passed by the Parliament of Great Britain, receiving royal assent on 20 May 1774. The act effectively abrogated the existing colonial charter of the Province of Massachusetts Bay, and gave its royally-appointed governor wide-ranging powers. The Act is one of the Intolerable Acts (also known as Repressive Acts and Coercive Acts), designed to suppress dissent and restore order in Massachusetts. In the wake of the Boston Tea Party, Parliament launched a legislative offensive against Massachusetts to control its errant behavior. British officials believed that their inability to control Massachusetts was rooted in part in the highly independent nature of its local government.

The Massachusetts Government Act abrogated the colony’s charter and provided for a greater amount of royal control. Massachusetts had been unique among the colonies in its ability to elect members of its executive council. This Act took away that right and instead gave the king sole power to appoint and dismiss the council. Additionally, many civil offices that had previously been chosen by election were now to be appointed by the royal governor. Town meetings were forbidden without consent of the governor. As Lord North explained to Parliament, the purpose of the act was “to take the executive power from the hands of the democratic part of government”.

When Governor Thomas Gage invoked the act in October 1774 to dissolve the provincial assembly, its Patriot leaders responded by creating the Massachusetts Provincial Congress, which acted as the province’s (and later the independent state’s) de facto government until the 1780 adoption of the Massachusetts State Constitution.

The act was repealed in 1778 as part of British Parliamentary attempts to reach a diplomatic end to the ongoing American Revolutionary War.