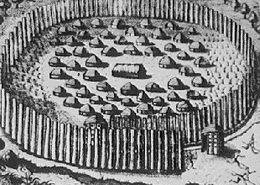 The vicinity of St. Augustine was first explored in 1513 by Spanish explorer and governor of Puerto Rico , Juan Ponce de León, who claimed the region for the Spanish crown.[6]Prior to the founding of St. Augustine in 1565, several earlier attempts at European colonization in what is now Florida were made by both Spain and France, but all failed.

The French exploration of the area began in 1562, under the Huguenot  captain Jean Ribault. Ribault explored the St. Johns River to the north of St. Augustine before sailing north, ultimately founding the short-lived Charlesfort on what is now known as Parris Island, South Carolina. In 1564, Ribault’s former lieutenant René Goulaine de Laudonnière headed a new colonization effort. Laudonnière explored St. Augustine Inlet and the Matanzas River, which the French named the River of Dolphins.[7] There they made contact with the local Timucua chief, probably Seloy, a subject of the powerfulSaturiwa chiefdom, before heading north to the St. Johns River. There they establishedFort Caroline.

Later that year some mutineers from Fort Caroline fled the colony and turned pirate, attacking Spanish vessels in the Caribbean. The Spanish used this as a catalyst to locate and destroy Fort Caroline, fearing it would serve as a base for future piracy, and wanting to dissuade further French colonization. The Spanish quickly dispatched Pedro Menéndez de Avilés  to go to Florida and establish a base from which to attack the French.[4]

The first slaves in the territory that we now regard as the United States were brought to St. Augustine on the day it was founded by Pedro Menéndez de Avilés on September 8, 1565. Menéndez’s contract with King Phillip afforded him three years to import 500 African slaves.[14]  In 1566, Martín de Argüelles was born in San Agustín, the first European child who was recorded as born in the continental United States. Argüelles was born in San Agustín 21 years before the English settlement at Roanoke Island in Virginia Colony, and 42 years before the successful settlements of Santa Fe, New Mexico, and Jamestown, Virginia. Additionally, the first recorded birth of a black child in the continental United States is in the Cathedral Parish Archives. Augustin was recorded as born in the year 1606, thirteen years before enslaved Africans were first brought to the English colony at Jamestown in 1619.[citation needed] In territory under the jurisdiction of the United States, only Puerto Rico has continuously occupied European-established settlements older than St. Augustine.Pedro Menéndez de Avilés sighted land on August 28, 1565. As this was the feast day of Augustine of Hippo, the territory was named San Agustín. The Spanish sailed through the St. Augustine Inlet into Matanzas Bay and disembarked near the Timucuatown of Seloy on September 7.[8][9][10][11][12] Menéndez’s goal was to dig a quick fortification to protect his people and supplies as they were unloaded from the ships, and then to take a more proper survey of the area to determine the best location for the fort. The location of this early fort has been confirmed through archaeological excavations directed by Kathleen Deagan on the grounds of what is now the Fountain of Youth Archaeological Park.[13] It is known that the Spanish occupied several structures in Seloy, the chief of which, known as Chief Seloy, was allied with the Saturiwa, Laudonnière’s allies. It is possible, but undemonstrated, that Menéndez fortified one of the occupied Timucua structures as this first fort at Seloy.[8] In the meantime, Jean Ribault, Laudonnière’s old commander, arrived at Fort Caroline with more settlers for the colony, as well as soldiers and weapons to defend them. He also took over the governorship of the settlement. Despite Laudonnière’s wishes, Ribault put most of these soldiers aboard his ships for an assault on St. Augustine. However, he was surprised at sea by a violent storm lasting several days. This gave Menéndez the opportunity to march his forces overland for surprise dawn attack on the Fort Caroline garrison, which then numbered several hundred people. Laudonnière and some survivors fled to the woods, and the Spanish killed almost everyone in the fort except for the women and children. With the French displaced, Menéndez rechristened the fort as San Mateo, and appropriated it for his own purposes. The Spanish then returned south and eventually encountered the survivors of Ribault’s fleet near the inlet at the southern end of Anastasia Island. Menéndez executed most of the survivors, including Ribault; the inlet was thus named for the Spanish word for slaughters, matanzas.