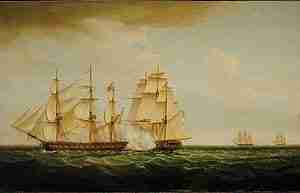 The Action of 14 September 1779 was a minor naval engagement between a British Royal Naval frigate HMS Pearl and a Spanish frigate Santa Mónica off the Azores during the American War of Independence.

The Spanish Navy had been patrolling the Azores since July with a small squadron of ships under of Lt. Gen. Don Antonio de Ulloa, with his flagship Fenix, ships of the line Gallardo, Diligent and San Julián, and the frigates Santa Maria and Santa Mónica.

On the 14th of September, the British 32-gun frigate HMS Pearl, Captain George Montagu while cruising off the Azores in the early hours of the morning chased a large ship which turned out to be the Spanish 28 gun frigate Santa Mónica under the command of Don Miguel de Nunes. The Santa Mónica was a new ship, mounting 26 long 12-pounders on her main deck, and two 4-pounders on her quarter-deck, with a crew of 271 men. Santa Mónica in addition exceeded the Pearl in point of tonnage. At 09:30am, Pearl caught up with the ship and commenced action. After fighting for two hours, the Santa Mónica becoming severely damaged and having had 38 men killed and 45 wounded, struck her colours. The Pearl was little damaged except to her rigging and suffered a loss of 12 men killed and 19 wounded. Ulloa was acquitted in a court martial back in Cadiz in October back because of the loss of the Santa Mónica.