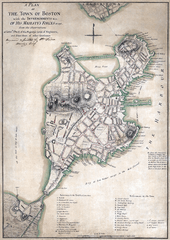 One of the oldest cities in the United States, Boston was founded on the Shawmut Peninsula in 1630 by Puritan colonists from England. It was the scene of several key events of the American Revolution, such as the Boston Massacre, the Boston Tea Party, the Battle of Bunker Hill and the Siege of Boston. Upon American independence from Great Britain, the city continued to be an important port and manufacturing hub, as well as a center for education and culture. Through land reclamation and municipal annexation, Boston has expanded beyond the original peninsula. Its rich history helps attract many tourists, with Faneuil Hall alone attracting over 20 million visitors. Boston’s many “firsts” include the United States’ first public school (1635), and first subway system (1897).

The area’s many colleges and universities make Boston an international center of higher education and medicine, and the city is considered to be a world leader in innovation for a variety of reasons. Boston’s economic base also includes finance, professional and business services, and government activities. The city has one of the highest costs of living in the United States, though it remains high on world livability rankings.

Boston’s early European settlers had first called the area Trimountaine (after its “three mountains”—only traces of which remain today) but later renamed it Boston after Boston, Lincolnshire, England, from which several prominent colonists had come. The renaming, on September 7, 1630 (old style), was by Puritan colonists from England,{sfn|Kennedy|1994|pp=11–12} who had moved over from Charlestown earlier that year in quest of fresh water. Their settlement was initially limited to the Shawmut Peninsula, at that time surrounded by the Massachusetts Bay and Charles River and connected to the mainland by a narrow isthmus. The peninsula is known to have been inhabited as early as 5000 BC.

In 1629, the Massachusetts Bay Colony’s first governor, John Winthrop, led the signing of the Cambridge Agreement, a key founding document of the city. Puritan ethics and their focus on education influenced its early history;{sfn|Christopher|2006|p=46} America’s first public school was founded in Boston in 1635. Over the next 130 years, the city participated in four French and Indian Wars, until the British defeated the French and their native allies in North America. Boston was the largest town in British North America until Philadelphia grew larger in the mid 18th century.

Many of the crucial events of the American Revolution —the Boston Massacre, the Boston Tea Party, Paul Revere’s “midnight ride”, the battles of Lexington and Concord and Bunker Hill, the Siege of Boston, and many others—occurred in or near Boston. After the Revolution, Boston’s long seafaring tradition helped make it one of the world’s wealthiest international ports, with rum, fish, salt, and tobacco being particularly important.