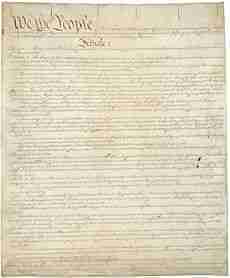 Once the final modifications had been made, the Committee of Style and Arrangement was appointed “to revise the style of and arrange the articles which had been agreed to by the house.” Unlike other committees, whose members were named so the committees included members from different regions, this final committee included no champions of the small states. Its members were mostly in favor of a strong national government and unsympathetic to calls for states’ rights.{rp|229–230} They were William Samuel Johnson (CT), Alexander Hamilton (NY), Gouverneur Morris (PA), James Madison (VA), and Rufus King (MA). On Wednesday, September 12, the report of the “committee of style” was ordered printed for the convenience of the delegates. For three days, the Convention compared this final version with the proceedings of the Convention. The Constitution was then ordered engrossed on Saturday, September 15 by Jacob Shallus, and was submitted for signing on September 17. It made at least one important change to what the Convention had agreed to; King wanted to prevent states from interfering in contracts. Although the Convention never took up the matter his language was now inserted, creating the contract clause.