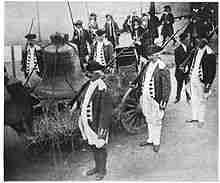 The Continental Congress Leaves Philadelphia and the Liberty Bell is Relocated to Allentown, Pennsylvania. After Washington’s defeat at the Battle of Brandywine on September 11, 1777, the revolutionary capital of Philadelphia was defenseless, and the city prepared for what was seen as an inevitable British attack. Bells could easily be recast into munitions, and locals feared the Liberty Bell and other bells would meet this fate. The bell was hastily taken down from the tower, and sent by heavily guarded wagon train to the town of Bethlehem. Local wagoneers transported the bell to the Zion German Reformed Church in Northampton Town, now Allentown, where it waited out the British occupation of Philadelphia under the church floor boards.[24] It was returned to Philadelphia in June 1778, after the British departure. With the steeple of the State House in poor condition (the steeple was subsequently torn down and later restored), the bell was placed in storage, and it was not until 1785 that it was again mounted for ringing.[25]