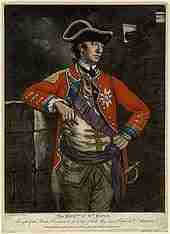 General Howe landed 15,000 troops in late August at the northern end of the Chesapeake Bay, about 55 miles (90 km) southwest of Philadelphia. General Washington positioned 11,000 men between Howe and Philadelphia but was outflanked and driven back at the Battle of Brandywine on September 11, 1777 suffering over 1,000 casualties, while the British lost about half that number.

The Continental Congress once again abandoned the city, relocating first to Lancaster, Pennsylvania, and later York, Pennsylvania. British and Revolutionary forces maneuvered around each other west of Philadelphia for the next several days, clashing in minor encounters such as the abortive Battle of the Clouds and the so-called “Paoli Massacre.” On September 26, Howe finally outmaneuvered Washington and marched into Philadelphia unopposed. Capture of the rebel capital did not bring the end to the rebellion as the British thought it would. In 18th Century warfare, normally the side that captured the other side’s capital city won the war. But the war was to continue for six more years (until 1783) given the unconventional warfare at the time.

After taking the city, the British garrisoned about 9,000 troops in Germantown, five miles (8 km) north of Philadelphia. Washington unsuccessfully attacked Germantown on October 4, and then retreated to watch and wait for the British to counterattack. Meanwhile, the British secured the Delaware River by taking forts Mifflin and Mercer in November (although the latter was not taken until after a humiliating repulse). In early December, Washington successfully repelled a series of probes by General Howe in the Battle of White Marsh.

General Washington’s problems at this time were not just with the British. In the so-called Conway Cabal, some politicians and officers unhappy with Washington’s performance in the campaign secretively discussed his removal. Washington, offended by the behind-the-scenes maneuvering, laid the whole matter openly before Congress. His supporters rallied behind him, and the episode was abated.