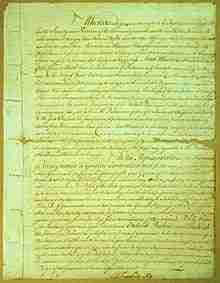 The Pennsylvania Constitution of 1776 (ratified September 28, 1776) was the state’s first constitution following the Declaration of Independence, and has been described as the most democratic in America. It was drafted by Robert Whitehill, Timothy Matlack, Dr. Thomas Young, George Bryan, James Cannon, and Benjamin Franklin. Pennsylvania’s innovative and highly democratic government structure, featuring a unicameral legislature, may have influenced the later French Republic’s formation under the French Constitution of 1793.

==Innovations of the 1776 Constitution==

The 1776 Constitution contained seven of the six points of the United Kingdom’s People’s Charter, over 50 years before that document was written. Some of the radical innovations included:

* Voting franchise for all men who had paid taxes, but without property qualifications.
* A unicameral legislature, with members elected for one term.
* A twelve-member Supreme Executive Council to administer the government.
* A judiciary appointed by the legislature for seven-year terms, and removable at any time.
* The provision that all approved legislation wait to be enacted until the next session of the Assembly, so that the people of the state could assess the utility of the proposed law.
* A President elected by the Assembly and Council together. Thomas Wharton Jr. was chosen in 1777 to be the first President of the Supreme Executive Council.
* A Council of Censors (elected every seven years) to conduct an evaluation of the activities. They could “censure” actions by the government deemed to have violated the constitution. The Council of Censors was the only body with the authority to call a convention to amend the constitution.”’

The Pennsylvania constitution included a declaration of rights that coincides with the Virginia Declaration of Rights in 1776.

A DECLARATION OF THE RIGHTS OF THE INHABITANTS OF THE COMMONWEALTH, OR STATE OF PENNSYLVANIA

I. That all men are born equally free, and independent; and have certain, natural, inherent, and inalienable rights; amongst which are; the enjoying and defending of life and liberty; acquiring, possessing, and protecting property; and pursuing and obtaining happiness and safety.

II. That all men have a natural, and unalienable right, to worship Almighty God according to the dictates of their own consciences and understanding: And that no man ought, or of right, can be compelled to attend any religious worship, or erect or support any place of worship, or maintain any ministry, CONTRARY TO, OR AGAINST, his own free will and consent: NOR can any man, who acknowledges the being of a God, be justly deprived or abridged of any civil right as a citizen, on account of his religious sentiments or peculiar mode of religious worship: And that NO AUTHORITY can or ought to be vested in, or assumed by any power whatever, that shall in any case interfere with, or in any manner control, the right of conscience in the free exercise of religious worship.

III. That THE PEOPLE of this State have the sole, exclusive, and inherent right of governing; and regulating, the internal police of the same.

IV. That all power being originally inherent in, and consequently derived from, the people; therefore all officers of government, whether legislative, or executive, are their trustees, and servants, and at all times accountable to them.

V. That government is, or ought to be, instituted for the common benefit, protection and security of the people nation or community; and not for the particular emolument or advantage of any single man, family, or sett of men, who are a part only of that community; And that the community hath an indubitable, unalienable and indefeasible right to reform, alter, or abolish government in such manner as shall be by that community judged most conducive to the public weal.

VI. That those who are employed in the legislative and executive business of the State, may he restrained from oppression, the people have a right, at such periods as they may think proper, to reduce their public officers to a private station, and supply the vacancies by certain and regular elections.

VII. That all elections ought to be free; and that all free men having a sufficient evident common interest with, and attachment to the community, have a right to elect officers, or to be elected into office.

VIII. That every member of society hath a right to be protected in the enjoyment of life, liberty and property, and therefore is bound to contribute his proportion towards the expense of that protection, and yield his personal service when necessary, or an equivalent thereto: But no part of a man’s property can be justly taken from him, or applied to public uses, without his own consent, or that of his legal representatives: Nor can any man who is conscientiously scrupulous of bearing arms, be justly compelled thereto, if he will pay such equivalent, nor are the people bound by any laws, but such as they have in like manner assented to, for their common good.

IX. That in all prosecutions for criminal offenses, a man hath a right to be heard by himself and his council, to demand the cause and nature of his accusation, to be confronted with the witnesses, to call for evidence in his favour, and a speedy public trial, by an impartial jury of the country, without the unanimous consent of which jury he cannot be found guilty; nor can he be compelled to give evidence against himself; nor can any man be justly deprived of his liberty except by the laws of the land, or the judgment of his peers.

X. That the people have a right to hold themselves, their houses, papers, and possessions free from search and seizure, and therefore warrants without oaths or affirmations first made, affording a sufficient foundation for them, and whereby any officer or messenger may be commanded or required to search suspected places, or to seize any person or persons, his or their property, not particularly described, are contrary to that right, and ought not to be granted.

XI. That in controversies respecting property, and in suits between man and man, the parties have a right to trial by jury, which ought to be held sacred.

XII. That the people have a right to freedom of speech, and of writing, and publishing their sentiments; therefore the freedom of the press ought not to be restrained.

XIII. That the people have a right to bear arms for the defense of themselves and the state; and as standing armies in the time of peace are dangerous to liberty, they ought not to be kept up; And that the military should be kept under strict subordination to, and governed by, the civil power.

XIV. That a frequent recurrence to fundamental principles, and a firm adherence to justice, moderation, temperance, industry, and frugality are absolutely necessary to preserve the blessings of liberty, and keep a government free: The people ought therefore to pay particular attention to these points in the choice of officers and representatives, and have a right to exact a due and constant regard to them, from their legislatures and magistrates, in the making and executing such laws as are necessary for the good government of the state.

XV. That all men have a natural inherent right to emigrate from one state to another that will receive them, or to form a new state in vacant countries, or in such countries as they can purchase, whenever they think that thereby they may promote their own happiness.

XVI. That the people have a right to assemble together, to consult for their common good, to instruct their representatives, and to apply to the legislature for redress of grievances, by address, petition, or remonstrance.