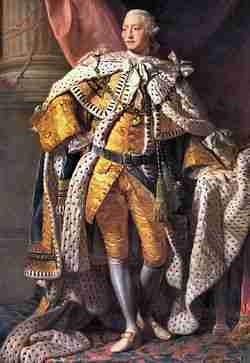 The Royal Proclamation of 1763 was issued October 7, 1763, by King George III following Great Britain’s acquisition of French territory in North America after the end of the French and Indian War/Seven Years’ War, in which it forbade settlers from settling past a line drawn along the Appalachian Mountains. The purpose of the proclamation was to organize Great Britain’s new North American empire and to stabilize relations with Native North Americans through regulation of trade, settlement, and land purchases on the western frontier. The Royal Proclamation continues to be of legal importance to First Nations in Canada and is significant for the variation of indigenous status in the United States. It eventually ensured that British culture and laws were applied in Upper Canada after 1791, which was done to attract British settlers to the province.

The Treaty of Paris was the conclusion of the Seven Years’ War. It ceded enormous areas previously claimed by France to British Crown control. These areas were all of continental North America east of the Mississippi River including Quebec.

One of the biggest problems confronting the British Empire in 1763 was controlling land speculators in both Europe and the British colonies whose activities often led to frontier conflicts. Some Native American peoples—primarily in the Great Lakes region—had a long and close relationship with France, and were dismayed to find that they were now under British sovereignty. Pontiac’s Rebellion (1763–66) was an unsuccessful effort by Native Americans to prevent Great Britain from occupying the land previously claimed by France. The Proclamation of 1763 had been in the works before Pontiac’s Rebellion, but the outbreak of the conflict hastened the process. British officials hoped the proclamation would reconcile Aboriginals to British rule and thus help to prevent future hostilities.

The proclamation created a boundary line (often called the proclamation line) between the British colonies on the Atlantic coast and American Indian lands (called the Indian Reserve) west of the Appalachian Mountains. The proclamation line was not intended to be a permanent boundary between white and Aboriginal lands, but rather a temporary boundary which could be extended further west in an orderly, lawful manner. Its contour was defined by the headwaters that formed the watershed along the Appalachia—all land with rivers that flowed into the Atlantic was designated for the colonial entities while all the land with rivers that flowed into the Mississippi was reserved for the native Indian population. The proclamation outlawed private purchase of Native American land, which had often created problems in the past; instead, all future land purchases were to be made by Crown officials “at some public Meeting or Assembly of the said Indians”. Furthermore, British colonists were forbidden to move beyond the line and settle on native lands, and colonial officials were forbidden to grant grounds or lands without royal approval. The proclamation gave the Crown a monopoly on all future land purchases from American Indians.

Almost immediately, many British colonists and land speculators objected to the proclamation boundary, since there were already many settlements beyond the line (some of which had been temporarily evacuated during Pontiac’s War), as well as many existing land claims yet to be settled. Prominent American colonists joined with land speculators in Britain to lobby the government to move the line further west. As a result, the boundary line was adjusted in a series of treaties with Native Americans. The Treaty of Fort Stanwix and the Treaty of Hard Labour (both 1768) and the Treaty of Lochaber (1770) opened much of what is now West Virginia and Kentucky to British settlement.

According to historian Colin Calloway, “[settler] scholars disagree on whether the proclamation recognized or undermined tribal sovereignty”. The proclamation established the important precedent that the indigenous population had certain rights to the lands they occupied.

Some see the Royal Proclamation of 1763 as a “fundamental document” for First Nations land claims and self-government. It is “the first legal recognition by the British Crown of Aboriginal rights” and imposes a fiduciary duty of care on the Crown. The intent and promises made to the native in the Proclamation have been argued to be of a temporary nature, only meant to appease the Native peoples who were becoming increasingly resentful of “settler encroachments on their lands” and were capable of becoming a serious threat to British colonial settlement. An advice given by a merchant to the Board of Trade on August 30, 1764 expressed that The Indians all know we cannot be a Match for them in the midst of an extensive woody Country…from whence I infer that if we are determined to possess Our Posts, Trade & ca securely, it cannot be done for a Century by any other means than that of purchasing the favour of the numerous Indian inhabitants. Some historians claim that “the British were trying to convince Native people that there was nothing to fear from the colonists, while at the same time trying to increase political and economic power relative to First Nations and other European powers.” However, the Royal Proclamation along with the subsequent Treaty of Niagara, provide for an argument that “discredits the claims of the Crown to exercise sovereignty over First Nations” and affirms Aboriginal “powers of self-determination in, among other things, allocating lands.” Further so, the Royal Proclamation outlined a policy in which to protect Aboriginal rights and in doing so, recognized these rights existed.

The influence of the Royal Proclamation of 1763 on the coming of the American Revolution has been variously interpreted. Many historians argue that the proclamation ceased to be a major source of tension after 1768, since the aforementioned treaties opened up extensive lands for settlement. Others have argued that colonial resentment of the proclamation contributed to the growing divide between the colonies and the mother country. Some historians argue that even though the boundary was pushed west in subsequent treaties, the British government refused to permit new colonial settlements for fear of instigating a war with Native Americans, which angered colonial land speculators. Others argue that the Royal Proclamation imposed a fiduciary duty of care on the Crown.

George Washington was given {convert|20000|acre|km2} of wild land in the Ohio region for his services in the French and Indian War. In 1770, Washington took the lead in securing the rights of him and his old soldiers in the French War, advancing money to pay expenses in behalf of the common cause and using his influence in the proper quarters. In August 1770, it was decided that Washington should personally make a trip to the western region, where he located tracts for himself and military comrades and eventually was granted letters patent for tracts of land there. The lands involved were open to Virginians under terms of the Treaty of Lochaber of 1770, except for the lands located 2 miles south of Fort Pitt, now known as Pittsburgh.

In the United States, the Royal Proclamation of 1763 ended with the American Revolutionary War because Great Britain ceded the land in question to the United States in the Treaty of Paris (1783). Afterward, the U.S. government also faced difficulties in preventing frontier violence and eventually adopted policies similar to those of the Royal Proclamation. The first in a series of Indian Intercourse Acts was passed in 1790, prohibiting unregulated trade and travel in Native American lands. In 1823, the U.S. Supreme Court case Johnson v. M’Intosh established that only the U.S. government, and not private individuals, could purchase land from Native Americans.

In October 2013 the 250th anniversary of the Royal Proclamation was celebrated in Ottawa with a meeting of Indian leaders and Governor-General David Johnston. The aboriginal movement Idle No More held birthday parties for this monumental document at various locations across Canada.