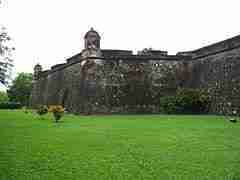 The Battle of San Fernando de Omoa was a short siege and battle between British and Spanish forces fought not long after Spain entered the American Revolutionary War on the American side. On 16 October 1779, following a brief attempt at siege, a force of 150 British soldiers and seamen assaulted and captured the fortifications at San Fernando de Omoa in the Captaincy General of Guatemala (now Honduras) on the Gulf of Honduras.

The British forces managed to overwhelm and capture the Spanish garrison, consisting of 365 men. The British only held the fort until November 1779. They then withdrew the garrison, which tropical diseases had reduced, and which was under threat of a Spanish counter-attack.

When Spain entered the American Revolutionary War in June 1779, both Great Britain and Spain had been planning for the possibility of hostilities for some time. King Carlos III set the defense of the Captaincy General of Guatemala as one of his highest priorities in the Americas, after the conquest of British West Florida. His forces seized the initiative in North America, where they rapidly captured the British outpost at Baton Rouge in September 1779, before the British were able to marshal significant defensive forces in the area. The British sought to gain control over Spanish colonies in Central America, and their first target was San Fernando de Omoa, a fortress that Matías de Gálvez, the Captain General of Guatemala, called “the key and outer wall of the kingdom”.

However, the Spanish struck first. In September the capture of Cayo Cocina gave them possession of the British settlement at St. George’s Caye (off the coast near present-day Belize City).

Then, anticipating a British attack against the nearby port of Santo Tomás de Castilla, Gálvez withdrew the garrison there to Omoa. The Spanish had started building San Fernando de Omoa, principally with African slave labour, in the 1740s during the War of Jenkins’ Ear. It became of the largest defensive fortifications in Central America, and one of the Guatemalan Captaincy General’s principal Caribbean ports.

The decision by Gálvez to withdraw to Omoa upset British plans. Commodore John Luttrell, in command of three ships and 250 men, had intended an attack on the Santo Tómas, but his force was inadequate for an attack on Omoa. Even when he and Captain William Dalrymple arrived at Omoa on 25 September with 500 men, they were forced to retreat after a brief exchange of cannon fire. The British returned with a force of more than 1,200 men and twelve ships in early October.

The British established some batteries to fire on the fort, and supported them with fire from three ships. Simón Desnaux, the fort’s commander, returned fire. He succeeded in damaging {HMS|Lowestoffe|1761|6}, which ran aground but was eventually refloated. Although, Desnaux was badly outnumbered, he refused an offer for surrender, in the hope that Gálvez would be able to send reinforcements.

On the night of 20 October, a small number of British attackers climbed into the fort and opened one of the gates. After a brief exchange of small arms fire, Desnaux surrendered. Among the spoils the British won when they gained control of Omoa were two Spanish ships, anchored in the harbor, that held more than three million Spanish dollars of silver.

Gálvez immediately began planning a counterattack. On 25 November his forces began besieging the fort, now under Dalrymple’s control, engaging in regular exchanges of cannon fire. Gálvez, whose force was smaller than Dalrymple’s, magnified its apparent size by setting extra campfires around the fort. He then attempted an assault on 29 November but difficulties with his artillery caused him to call it off. Still, Dalrymple, whose forces were significantly reduced by tropical diseases, withdrew his men from the fort and evacuated them that same day. 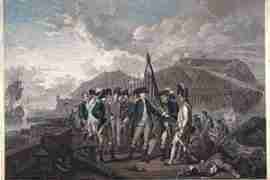