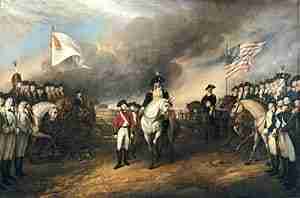 With the British defense weakened, Washington on October 14, 1781 sent two columns to attack the last major remaining British outer defenses. A French column took redoubt #9 and an American column redoubt #10. With these defenses taken, the allies were able to finish their second parallel.{Citation needed|date=July 2010} With the American artillery closer and more intense than ever, the British situation began to deteriorate rapidly and Cornwallis asked for capitulation terms on the 17th. After two days of negotiation, the surrender ceremony took place on the 19th; Lord Cornwallis, claiming to be ill, was absent from the ceremony. With the capture of over 7,000 British soldiers, negotiations between the United States and Great Britain began, resulting in the Treaty of Paris in 1783.