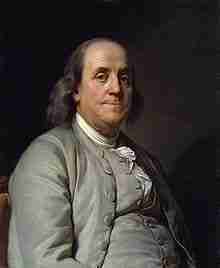 Franklin was dispatched to France as commissioner for the United States. He took with him as secretary his 16-year-old grandson, William Temple Franklin. They lived in a home in the Parisian suburb of Passy, donated by Jacques-Donatien Le Ray de Chaumont, who supported the United States. Franklin remained in France until 1785. He conducted the affairs of his country toward the French nation with great success, which included securing a critical military alliance in 1778 and negotiating the Treaty of Paris (1783).

Among his associates in France was Honoré Gabriel Riqueti, comte de Mirabeau—a French Revolutionary writer, orator and statesman who in early 1791 would be elected president of the National Assembly.[94] In July 1784, Franklin met with Mirabeau and contributed anonymous materials that the Frenchman used in his first signed work: Considerations sur l’ordre de Cincinnatus. The publication was critical of the Society of the Cincinnati, established in the United States. Franklin and Mirabeau thought of it as a “noble order,” inconsistent with the egalitarian ideals of the new republic.

During his stay in France, Benjamin Franklin was active as a freemason, serving as Grand Master of the Lodge Les Neuf Sœurs from 1779 until 1781. His lodge number was 24. He was a Past Grand Master of Pennsylvania. In 1784, when Franz Mesmer began to publicize his theory of “animal magnetism”, which was considered offensive by many, Louis XVI appointed a commission to investigate it. These included the chemist Antoine Lavoisier, the physician Joseph-Ignace Guillotin, the astronomer Jean Sylvain Bailly, and Benjamin Franklin.

While in France Franklin designed and commissioned Augustin Dupré to engrave the medallion “Libertas Americana” minted in Paris in 1783.
Franklin’s advocacy for religious tolerance in France contributed to arguments made by French philosophers and politicians that resulted in Louis XVI’s signing of the Edict of Versailles in November 1787. This edict effectively nullified the Edict of Fontainebleau, which had denied non-Catholics civil status and the right to openly practice their faith.