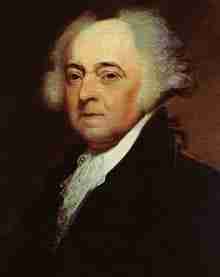 John Adams, the eldest of three sons,[6] was born on October 30, 1735 (October 19, 1735 Old Style, Julian calendar), in what is now Quincy, Massachusetts (then called the “north precinct” of Braintree, Massachusetts), to John Adams, Sr., and Susanna Boylston Adams.[7] Adams’s birthplace is now part of Adams National Historical Park. His father (1691–1761) was a fifth-generation descendant of Henry Adams, who emigrated from Somerset[8] in England to Massachusetts Bay Colony in about 1638. The elder Adams, the descendant of Puritans, continued in this religious tradition by serving as a Congregationalist deacon; he also farmed and served as a lieutenant in the militia. Further he served as a selectman, or town councilman, and supervised the building and planning of schools and roads. Adams commonly praised his father and indicated that he and his father were very close when he was a child.