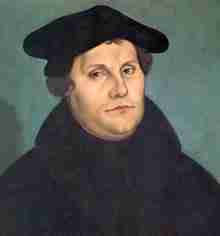 Luther’s Theses were a key influence in Europe that eventually led to the movement of communities and colonization in America.

A replica of the Ninety-Five Theses in Schlosskirche, Wittenberg

On 31 October 1517, Luther posted the ninety-five theses, which he had composed in Latin, on the door of the Castle Church  of Wittenberg, according to university custom.[3]

On the same day, Luther sent a hand-written copy, accompanied with honourable comments, to the archbishop Albert of Mainz  and Magdeburg, responsible for the practice of the indulgence sales, and to the bishop of Brandenburg, the superior of Luther. He enclosed in his letter a copy of his “Disputation of Martin Luther on the Power and Efficacy of Indulgences,” which came to be known as The Ninety-Five Theses. Hans Hillerbrand writes that Luther had no intention of confronting the church but saw his disputation as a scholarly objection to church practices, and the tone of the writing is accordingly “searching, rather than doctrinaire.”[4] Hillerbrand writes that there is nevertheless an undercurrent of challenge in several of the theses, particularly in Thesis 86, which asks: “Why does the pope, whose wealth today is greater than the wealth of the richestCrassus, build the basilica of Saint Peter with the money of poor believers rather than with his own money?”[4]

Within two weeks, copies of the Theses had spread throughout Germany; within two months throughout Europe.[5] [6] In January 1518 Christoph von Scheurl and other friends of Luther translated the Ninety-Five Theses from Latin into German, printed, and widely copied them, making the controversy one of the first in history to be aided by the printing press.[7]

On June 15, 1520, Pope Leo X  issued a rebuttal to Luther’s Ninety-Five Theses, a papal encyclical titled Exsurge Domine (“Arise, O Lord”), from its opening words. This document outlined the Magisterium of the Church’s findings of where the pope believed Luther had erred.

As early as October 29, 1521, the chapel at Wittenberg began to turn away from private Masses[clarification needed ]. In 1522, much of the city began celebrating Lutheranservices instead of Roman Catholic services. Luther’s popularity grew rapidly, mostly because the general Roman Catholic church members were dissatisfied with the corruption and “worldly” desires and habits of the Roman Curia.[8][9][10]

As the Reformation  progressed, another element drew adherents to the ideas and practices that gradually became known as Lutheranism. Luther and others had urged that greater balance be observed in the attention given to the Hebrew and Christian Scriptures, along with the long-accepted sources of tradition and reason in the formation ofdoctrine.[11] This concept, called sola scriptura offered a basis for querying the tight hold Catholic prelates then had over both the content of faith, and over potentially abusive corollary practices like indulgential penance (the sale of indulgences).[12] As availability of the recently invented Moveable type printing press spread, literacy also grew among a populace now able to own books, including Bibles.[13] The laity, now able to read and examine traditional creedal content, was encouraged to test its fidelity to Scriptures; the Bible began to take on the character of an ur-text for faith; and a new emphasis on personal piety resulted. This required a different kind of internal balance between the new, wider accessibility of texts, and the need for informed interpretation of the Scriptures: attendance at public preaching and lecturing events grew. It also allowed individual ownership of a previously more contained theological process, so that individuals found themselves more invested in understanding and living out their faith.[14]

Placing his theses on a door as Luther did was not a new process. But his publication of his objections was paradigmatic of the resultant shift from internal to extramural debate on matters that had previously been taken as given.