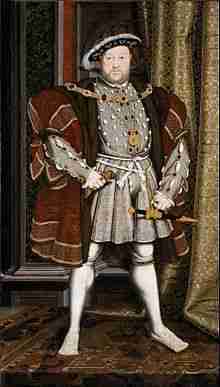 The first Act of Supremacy was a piece of legislation that granted King Henry VIII of England  Royal Supremacy, which means that he was declared the supreme head of the Church of England. It is still the legal authority of the Sovereign of the United Kingdom. Royal Supremacy is specifically used to describe the legal sovereignty of the civil laws over the laws of the Church in England.

The Act of Supremacy of November 1534 (26 Hen. VIII c. 1) was an Act of the Parliament of England  under King Henry VIII declaring that he was “the only supreme head on earth of the Church of England” and that the English crown shall enjoy “all honours, dignities, preeminences, jurisdictions, privileges, authorities, immunities, profits, and commodities to the said dignity.”[1] The wording of the Act made clear that Parliament was not granting the King the title (thereby suggesting that they had the right to withdraw it later); rather, it was acknowledging an established fact. In the Act of Supremacy, Henry abandoned Rome completely. He thereby asserted the independence of the Ecclesia Anglicana. He appointed himself and his successors as the supreme rulers of the English church. Henry had been declared “Defender of the Faith” (Fidei Defensor) in 1521 byPope Leo X for his pamphlet accusing Martin Luther of heresy.[2] Parliament later conferred this title upon Henry in 1544.[3]

The 1534 Act is often taken to mark the beginning of the English Reformation , although other sources suggest that it had been brewing for more than a century. There were a number of reasons for this Act, primarily the need for Henry to obtain an annulment of his marriage to Catherine of Aragon, because Catherine had not produced a son and heir[4](and because of Henry’s alleged misgivings about the legitimacy of his marriage to his late brother’s wife). Pope Clement VII still refused to grant the annulment, due to the familial connections Catherine had with the Holy Roman Emperor at the time (and fear caused by Charles V‘s sacking of Rome in 1527). The Treasons Act was later passed: it provided that to disavow the Act of Supremacy and to deprive the King of his “dignity, title, or name” was to be considered treason.[5] The most famous public figure to resist the Treason Act was Sir Thomas More.

(The Act was passed in 1559, but is dated 1558 because until 1793 legislation was back-dated to the beginning of the session of Parliament in which it was passed.) Henry’s Act of Supremacy was repealed (1554) in the reign of his staunchly Catholic daughter, Mary I . It was reinstated by Mary’s Protestant half-sister, Elizabeth I, when she ascended the throne. Elizabeth declared herself Supreme Governor of the Church of England, and instituted an Oath of Supremacy, requiring anyone taking public or church office to swear allegiance to the monarch as head of the church established rules of the Church of England unless their actions directly undermined the authority of the English monarch, as was the case in thevestments controversy. Thus, it was through the Second Act of Supremacy that Elizabeth I officially established the Anglican Church in England.

The consolidation of church and state under Royal Supremacy, as established by the Tudors, instigated political and religious strife in the succeeding centuries. This strife, along with similar struggles in Europe, is one reason there is a constitutional separation of church and state in many jurisdictions now.[citation needed ] In the United Kingdom, however, the state, in the guise of the Crown, still retains a significant involvement in the established Church of England.