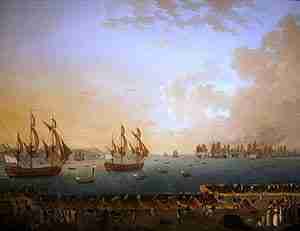 In the fall of 1779, a British fleet under Admiral Hyde Parker was anchored at St. Lucia (which they had captured a year before), while a French fleet under Admiral Toussaint-Guillaume Picquet de la Motte was undergoing a refit at the nearby island of Martinique in the West Indies. Parker was awaiting the arrival of Admiral George Brydges Rodney, who was to lead the 1780 campaign, and his fleet was largely at rest, with crews ashore and repairs being made to some vessels.

Around 8 am on 18 December, {HMS|Preston|1757|6}, which was stationed in the channel between the two islands, gave a signal indicating the arrival of an unknown fleet. Parker immediately scrambled, and managed to get five ships of the line and a 50-gun frigate out to meet the arriving fleet, which turned out to be a French supply fleet destined for Martinique. Before La Motte was able to muster some of his ships to meet them, Parker managed to capture nine of the convoy ships, forcing four of them ashore. Parker, who has called on all its ships, now has 13 ships of the line, against only three for the French.

La Motte left the anchorage at Fort Royal with his flagship Annibal (74 guns) and two ships of the line, Vengeur (64) and Réfléchi (64). As his arrival was to the windward, he was able to cover the arrival of the remaining convoy ships. The British fleet, with {HMS|Conqueror|1773|6} in the lead, began beating against the wind to closing with the French fleet. By 5 pm, Conqueror came with the range of Annibal{‘s} guns, and battle was engaged between those two, with the other French ships eventually joining in. The defense of La Motte-Picquet is facilitated by the shore batteries firing on the vessels of Parker.

By the time evening arrived, {HMS|Albion|1763|6} had also come within range, but the action had worked its way toward shoals near Fort Royal, and the French fleet was coming under the protection of the port’s guns. Parker finally called his fleet off at 6:45 pm, but one last broadside from the French fleet took the life of Conqueror{‘s} captain, Walter Griffith.

La Motte’s conduct during the battle impressed Hyde Parker sufficiently to make him send a congratulatory letter to his adversary when they had occasion to communicate via a truce flag.