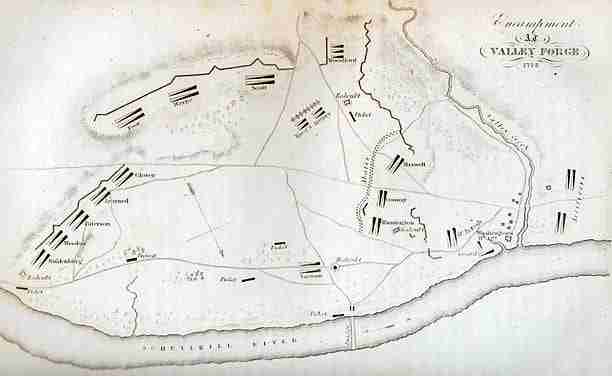 On December 19, 1777, when Washington’s poorly fed, ill-equipped army, weary from long marches, staggered into Valley Forge, winds blew as the 12,000 Continentals prepared for winter’s fury. Only about one in three of them had shoes, and many of their feet had left bloody footprints from the marching.Grounds for brigade encampments were selected, and defense lines were planned and begun.

The first properly constructed hut appeared in three days. One other hut, which required 80 logs, and whose timber had to be collected from miles away, went up in one week with the use of only one axe. These huts provided sufficient protection from the moderately cold, but mainly wet and damp conditions of a typical Pennsylvania winter of 1777–1778. By the beginning of February, construction of 2,000 huts were completed. They provided shelter, but did little to offset the critical shortages that continually plagued the army.

During the springtime, as the climate grew considerably warmer, Washington ordered the cutting of two windows into each hut. Mud was also chipped between the logs to improve ventilation.