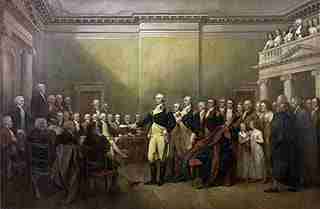 Because of his strategy, Revolutionary forces captured two major British armies at Saratoga in 1777 and Yorktown in 1781. Historians laud Washington for his selection and supervision of his generals, encouragement of morale and ability to hold together the army, coordination with the state governors and state militia units, relations with Congress and attention to supplies, logistics, and training. In battle, however, Washington was repeatedly outmaneuvered by British generals with larger armies. After victory had been finalized in 1783, Washington resigned as Commander-in-chief rather than seize power, proving his opposition to dictatorship and his commitment to American republicanism.