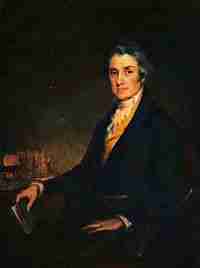 After attending a local village school, Abraham graduated from Yale University in nearby New Haven, Connecticut in 1772, where he was a member of the Linonian Society. Three years later, he became a minister and tutor at the college. He held that position until 1779, when he served as a chaplain in the Connecticut Contingent of the Continental Army. He did not see combat while with the Continental troops.

Two years later, he declined an offer from Yale for a divinity professorship. Instead of resuming his ministerial or educational duties after the war, he turned to the study of law and in 1783 was admitted to the bar.

Baldwin served as the first president of the University of Georgia during its initial planning phase, from 1785 to 1801. In 1801, Franklin College, UGA’s initial college, opened to students with Josiah Meigs succeeding Baldwin as president to oversee the inaugural class of students. The school was architecturally modeled on Baldwin’s alma mater, Yale. The University of Georgia’s mascot, the Georgia Bulldogs were a tribute to Baldwin. Yale University is represented by the Yale Bulldogs.

Baldwin became very active in the legislature of Georgia, able to mediate between the rougher frontiersman because of his childhood as the son of a blacksmith and the aristocratic planter elite which farmed the coast. He became one of the most prominent legislators, pushing significant measures such as the education bill through the sometimes split Georgia.

On March 4, 1807, at age 52, Baldwin died while serving as a U.S. senator from Georgia. Later that month the Savannah Republican and Savannah Evening Ledger reprinted a eulogy of the statesman which had first appeared in a Washington, D.C., newspaper: “He originated the plan of The University of Georgia, drew up the charter, and with infinite labor and patience, in vanquishing all sorts of prejudices and removing every obstruction, he persuaded the assembly to adopt it.”

His remains are interred at Rock Creek Cemetery.

He has been honored by the United States Postal Service with a 7¢ Great Americans series postage stamp.

Baldwin County, Alabama; Baldwin County, Georgia; Abraham Baldwin Agricultural College in Tifton, Georgia; Abraham Baldwin Middle School in Guilford, Connecticut; and Baldwin streets in Madison, Wisconsin and Athens, Georgia, are named in his honor. The University of Georgia has erected a statue of Baldwin on the historic North Campus quad in his honor as its founding father.