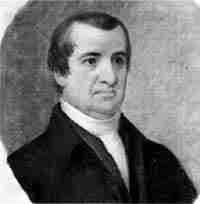 Abraham Clark (February 15, 1726 – September 15, 1794) was an American politician and Revolutionary War figure. He was delegate for New Jersey to the Continental Congress where he signed the Declaration of Independence and later served in the United States House of Representatives in both the Second and Third United States Congress, from March 4, 1791, until his death in 1794.

Abraham was born in Elizabethtown, New Jersey. His father, Thomas Clark, realized that he had a natural grasp for math so he hired a tutor to teach Abraham surveying. While working as a surveyor, he taught himself law and went into practice. He became quite popular and became known as “the poor man’s councilor” as he offered to defend poor men when they couldn’t afford a lawyer.

Clark married Sarah Hatfield in 1748, with whom he had 10 children. While Hatfield raised the children on their farm, Clark was able to enter politics as a clerk of the Provincial Assembly. Later he became High Sheriff of Essex County and in 1775 was elected to the Provincial Congress. He was a member of the Committee of Public Safety.

Early in 1776, the New Jersey delegation to the Continental Congress was opposed to independence from Great Britain. As the issue heated up, the state convention replaced all their delegates with those favoring the separation. Because Clark was highly vocal on his opinion that the colonies should have their independence, on June 21, 1776, they appointed him, along with John Hart, Francis Hopkinson, Richard Stockton, and John Witherspoon as new delegates. They arrived in Philadelphia on June 28, 1776, and signed the Declaration of Independence in early July.

Two of Clark’s sons were officers in the Continental Army. He refused to speak of them in Congress, even when they both were captured, tortured, and beaten. However, there was one instance when Clark did bring them up and that was when one of his sons was put on the prison ship, Jersey, notorious for its brutality. Captain Clark was thrown in a dungeon and given no food except that which was shoved through a keyhole. Congress was appalled and made a case to the British and his conditions were improved. The British offered Abraham Clark the lives of his sons if he would only recant his signing and support of the Declaration of Independence, he refused.{Citation needed|date=September 2013}

Clark remained in the Continental Congress through 1778, when he was elected as Essex County’s Member of the New Jersey Legislative Council. New Jersey returned him twice more, from 1780 to 1783 and from 1786 to 1788. Clark retired before the state’s Constitutional Convention in 1794. He died from sunstroke at his home.

Clark Township in Union County is named for him, as is Abraham Clark High School in Roselle.

Clark is buried at the Rahway Cemetery in Rahway, New Jersey.