Ahaya (Mikasuki) (ca. 1710 – 1783) was the first recorded chief of the Alachua band of the Seminole tribe. European-Americans called him Cowkeeper, as he held a very large herd of cattle.

Ahaya was born to the Muskogean-speaking Oconee, who were originally from central Georgia. His people settled along the Chattahoochee River in North Florida when he was a small boy. They were among the Native Americans who left Georgia and Alabama to escape encroachment by English colonists.

By his mid-twenties, Ahaya had been chosen as a chief of his village. He developed a hatred of the Spaniards who ruled over Florida, as they tried to force the Seminole into serving them as militia and workers. When James Oglethorpe, the governor of Georgia, launched an English raid against the Spanish capital at St. Augustine in 1740, Ahaya and his 45 warriors were willing allies.

About the year 1750, Ahaya led his people south to what is now Paynes Prairie, possibly near the ruins of the Timucua village of Potano. They found abundant game and fish, as well as many wild cows. His people collected the cattle to form a vast herd, earning their chief his English byname “Cowkeeper.” By 1757, Ahaya’s people had a thriving village of their own called Cuscowilla, on the northwest shore of Lake Tuscawilla, where the modern town of Micanopy now stands. That year, the chief visited the Governor of Georgia and expressed his hatred both for the Spanish and for any Indian tribes allied with them. He explained that he had a vision that he would not find peace in the afterlife unless he killed 100 Spaniards.

In 1763, when Spain ceded Florida to the British following the Seven Years War, in exchange for territory west of the Mississippi River, Ahaya was overjoyed. He traveled to St. Augustine for the inauguration of the new British governor Patrick Tonyn. The British treated his people as separate and distinct from the other native people of Florida, calling them “Seminole,” a name derived from the Spanish word cimarones, meaning runaways, or maroons. Eventually, this name was applied to all the people who formed a new tribe from Creek and other Muskogean peoples.

In 1774, the naturalist William Bartram of Philadelphia visited Ahaya at Cuskowilla. He was honored with a great feast featuring the Alachua band’s finest cattle. When Bartram explained to his host that he was interested in studying the local plants and animals, Ahaya was amused. He called the American scientist Puc-puggee, or “the flower hunter.” But, he also gave him free rein to explore his lands. In the same year, a Georgia settler named John Bryan attempted to trick the Creek chiefs in that colony to sign away the tribe’s rights to lands in Florida. Ahaya was shocked when the bold man traveled as far south as Payne’s Prairie to carve his name into a red oak tree, but his allies quickly intervened. Governor James Wright of Georgia informed the Creek of Bryan’s trickery, and Governor Tonyn of Florida issued an arrest warrant for him.

In 1783, when the British ceded Florida back to Spain following defeat in the American Revolutionary War, Ahaya saw a chance to fulfill his vision. He organized a war party to attack St. Augustine, but quickly fell ill. Knowing his end was near, he summoned his sons Payne and Bowlegs to his side to confess that he had killed only 86 Spaniards and asked them to kill the remaining 14 in his name. 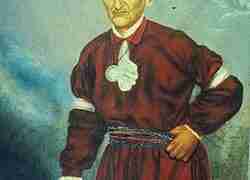