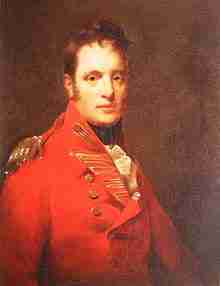 Colonel Alexander Campbell of Possil (see Carter-Campbell of Possil) entered the army as an Ensign in the 42nd Regiment in April 1769, and obtained a Lieutenancy in the 2nd Battalion Royals the following year in Minorca. He moved to the 62nd regiment later that year in Ireland, and went with the regiment to Canada, where, as a captain of Light Infantry under General Carleton, he fought in the campaigns of 1776 and 1777 with General Burgoyne in the American War of Independence.

After the surrender of Saratoga he was sent to New York, with the rank of Major, and was appointed to the 1st Battalion of Light Infantry. He received the Lieu-Colonelcy of the 62nd Regiment in 1782, and soon afterwards he returned to Scotland, where he remained with his regiment until 1789. He served with the Duke of York in the 1790s and was given the rank of Colonel on 1 October 1793. He raised the 16th Regiment in 1794 and was their first Brigadier-General. He was sent to the West Indies under Sir Ralph Abercromby and on 10 November 1796 was appointed Colonel of the 7th West India Regiment.

He returned to Scotland at the end of the 1790s and was placed on the Staff in Ireland and Scotland for five years. On 11 July 1804 he was appointed Colonel of the 19th Foot and served during the battles in South Africa being present at the capture of the Cape of Good Hope in 1806. He was also present at the battle of Corunna where he commanded the 20th regiment and subsequently became General on 1 January 1812 and Colonel of the 32nd Foot in February 1813.

In 1808 he acquired the estates of Possil in Lanarkshire from his father John Campbell, founder of the West Indian trading house of John Campbell Sr. of Glasgow, and subsequently the estates of Torosay and Achnacroish on the Isle of Mull, Argyllshire.