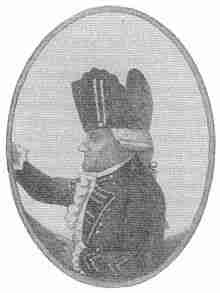 The Honourable Major General Alexander Leslie (1731 – 27 December 1794) was a Major General in the British Army during the American Revolutionary War. He was the commander of the British troops at the Battle of Harlem Heights. He replaced Cornwallis as commander in the South in 1782 and won an easy victory near Combahee Ferry.

Very little is known of his childhood. Leslie was born in England in 1731 to the Earl of Leven and Melville.

He enlisted in the 3rd Foot Guards of the British Army in 1753. He was promoted to Lieutenant-Colonel of the 64th Regiment of Foot in 1766.

In 1775, before the American War of Independence broke out, he led troops to Salem, Massachusetts looking for contraband weapons. His advance was delayed by a standoff at a bridge, during which the colonists removed the weapons he was looking for. His force was eventually allowed to proceed, but found nothing of consequence, and was received with hostility during the expedition.

In 1776, Leslie was promoted to Brigadier-General. He fought in the Battle of Long Island, the Landing at Kip’s Bay, the Battle of White Plains and the Battle of Harlem Heights, and the Siege of Charleston during the American War of Independence. In 1780, he was sent to the Chesapeake Bay by Sir Henry Clinton in order to “make a powerful diversion in [Earl Cornwallis’s] favor by striking at the magazines then collecting by the enemy … for supplying the army they were assembling to oppose him.” He became Major General in 1782. On 27 December 1794, Leslie became deathly ill while traveling from Glasgow and died at the Beechwood House.

In 1760, he married Mary Tullidelph. She died in 1761 in childbirth. Their daughter survived.