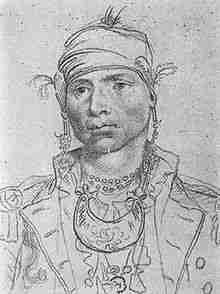 Alexander McGillivray, also known as Hoboi-Hili-Miko (December 15, 1750 – February 17, 1793), was a principal chief of the Upper Creek (Muscogee) towns from 1782. Before that he had created an alliance between the Creek and the British during the American Revolution. He worked to establish a Creek national identity and centralized leadership as a means of resisting European-American expansion onto Creek territory.

McGillivray was born Hoboi-Hili-Miko (Good Child King) in the Coushatta village of Little Tallassee (also known as Little Tallase, Little Talisi and Little Tulsa) on the Coosa River, near present-day Montgomery, Alabama. Alexander’s mother, Sehoy Marchand, was the daughter of Sehoy, a mixed-race Creek woman of the prestigious Wind Clan (“Hutalgalgi”), and of Jean Baptiste Louis DeCourtel Marchand, a French officer at Fort Toulouse. Alexander and his siblings were born into the Wind Clan, as the Muscogee had a matrilineal system, and gained their status from their mother’s clan. They identified as Creek. Their father was Lachlan McGillivray, a Scottish trader (of the Clan MacGillivray chief’s lineage). He built trading-posts among the Upper Towns of the Muscogee confederacy, whose members had formerly traded with French Louisiana.

As a child, Alexander briefly lived in Augusta with his father, who owned several large plantations and was a delegate in the colonial assembly. In 1773, the boy was sent to school in Charleston, South Carolina, where he learned Latin and Greek, and was apprenticed at a countinghouse in Savannah, Georgia. He returned to Little Tallassee in 1777. The revolutionary governments of Georgia and South Carolina confiscated the property of his Loyalist father, who returned to Scotland.

During the American Revolution, Alexander McGillivray was commissioned as a colonel in the British army. He brokered a British-Muscogee alliance. A skillful diplomat, he was an inept military strategist and rarely participated in battle.

In 1783, McGillivray became the principal chief of the Upper Creek towns. His predecessor, Chief Emistigo, died while leading a war-party to relieve the British garrison at Savannah, which was besieged by the Continental Army under General ‘Mad’ Anthony Wayne. At one time, McGillivray wielded great power, having from 5,000 to 10,000 warriors.

McGillivray opposed the 1783 Treaty of Augusta, under which two Lower Creek chiefs had ceded Muscogee lands from the Ogeechee to the Oconee rivers to the new state of Georgia. In June 1784 he negotiated the Treaty of Pensacola with Spain, which recognized Muscogee sovereignty over three million acres (12,000 km²) of land claimed by Georgia, guaranteed access to the British fur-trading company Panton, Leslie & Company, and made McGillivray an official representative of Spain, with a $50 monthly salary. McGillivray became a partner in Panton, Leslie & Co., and used his control over the deerskin trade to expand his power.

He sought to create mechanisms of centralized political authority to end the traditional village autonomy, by which individual chiefs had signed treaties and ceded land. Armed by British traders operating out of Spanish West Florida, the Muscogee raided back-country European-American settlers to protect their hunting grounds. From 1785 to 1787, Upper Creek war parties fought alongside the Cherokee in the Chickamauga Wars in present-day Tennessee. In 1786 a council of the Upper and Lower Creek in Tuckabatchee declared war against Georgia. The Spanish officials opposed this and, after they told McGillivray they would reduce aid if he persisted, he entered into peace talks with the U.S.

A Loyalist like his father, McGillivray resented the developing United States Indian policy; however, he did not wish to leave Creek territory. McGillivray became a leading spokesman for all the tribes along the Florida-Georgia border areas.

Georgia’s Yazoo land scandal convinced President George Washington that the federal government needed to control Indian affairs rather than allowing the states to make treaties. In 1790 he sent a special emissary to the Southeast, who persuaded McGillivray and other chiefs to attend a conference with Henry Knox, the Secretary of War, in New York City, then the capital of the U.S. The conference resulted in the Treaty of New York. (For decades Indian policy was under the oversight of the War Department.)

McGillivray and 29 other chiefs signed the Treaty of New York on behalf of the ‘Upper, Middle and Lower Creek and Seminole composing the Creek nation of Indians.’ The first treaty negotiated after ratification of the U.S. Constitution, it established the Altamaha and Oconee rivers as the boundary between Creek lands and the United States. The US government promised to remove illegal white settlers from the area, and the Muscogee agreed to return fugitive black slaves who sought refuge with the tribe. This provision angered the Seminole of Florida, who had provided refuge to numerous escaped slaves, and had intermarried with some. The Black Seminoles by this time had communities allied with the Seminole.

Under the treaty, McGillivray was commissioned as a brigadier general of the U.S., with an annual salary of $1,200. With this money, he acquired three plantations and 60 African-American slaves. The treaty temporarily pacified the Southern frontier, but the U.S. failed to honor its obligations and did not enforce eject white settlers who were illegally on Creek lands.

In 1792 McGillivray repudiated the treaty with the US. He negotiated another with Spanish officials, who then ruled the Louisiana Territory vacated by the French. They promised to respect Muscogee sovereignty. McGillivray was a man of remarkable ability, as evident from his control and influence over the Creek people, and from his success in keeping both the United States and Spain paying for his influence at the same time. In 1792 he was the superintendent-general of the Creek nation on behalf of Spain, the Indian agent of the United States, the mercantile partner of Panton, and “emperor” of the Creek and Seminole nations.

McGillivray moved to Pensacola, where he became a member of the Masonic Order. He died on February 17, 1793 in Pensacola and was buried there at Garden of Panton Cemetery. Later his sister had his body reinterred at Choctaw Bluff where he had earlier had his plantation in Clarke County, Alabama, above the Alabama River.

Two of his maternal nephews, William Weatherford and William McIntosh, who were also born into the powerful Creek Wind Clan (“Hutalgalgi”), became the most important Muscogee leaders in the early 19th century. They fought on opposing sides of the Creek War, a conflict that arose between traditionalists, such as Weatherford, and those of the Lower Creek, such as McIntosh, who believed it was necessary to adapt and take on useful European-American customs. In part the conflict arose because of the peoples’ geographic positions; those closer to European-American settlement had more interaction with the Americans, as well as the benefits.